Hyderabad stunned Bangalore by 118 runs in what was a completely one-sided contest on Sunday at Hyderabad. After posting 231 for 2, Hyderabad clean up Bangalore

Hyderabad stunned Bangalore by 118 runs in what was a completely one-sided contest on Sunday at Hyderabad. After posting 231 for 2, Hyderabad clean up Bangalore for a mere 113. Here are some incredible stats from the match.

Both David Warner and Jonny Bairstow slammed hundreds for Hyderabad. This is only the second time in Indian T20 history that such an instance has occurred. Virat Kohli and AB de Villiers were the only other pair to do so, for Bangalore against Gujarat in 2016, according to a Cricinfo report. 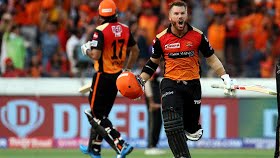 The 185-run opening stand between Warner and Bairstow now becomes the highest in the Indian T20. The previous one was an undefeated 184 between Gautam Gambhir and Chris Lynn for Kolkata against Gujarat.

The Warner-Bairstow pair also became the first in Indian T20 to share three century stands in a row even as Hyderabad registered their highest ever total of 231.