Every time we woke up, it was the worst feeling: Virat Kohli on World Cup 2019 exit

With the shock World Cup exit behind them, India look to start afresh and build towards the World T20 to be held next year.

The preparations kick off with the first T20I against West Indies at Florida today. Although West Indies had a poor World Cup, the reigning World T20 champions will begin as favourites against India, also having the home advantage.

Ahead of the match, Indian skipper Virat Kohli spoke about how the side coped up with the World Cup semi-final loss to England. “The first few days after the World Cup exit was quite difficult, till the time the tournament got over. 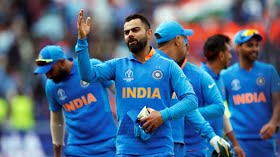 "Every time we woke up, it was the worst feeling in the morning and you do things through the day and get on with your life. We are professionals and every team has to move on. We are quite okay with what happened in the World Cup,” Kohli told reporters.

Speaking about the newcomers, he stated that the IPL experience of playing in front of big crowds should aid them in West Indies. “They play in front of 40 to 50,000 people regularly. They score against top players and also get them out. It will not be too intimidating for them and we have a lot of belief in their abilities. They have come here for the T20 experience," Kohli was quoted as saying in a Sportstar report.

On the World T20 preparations, he added that they have 20 to 25 games to get the right combination and will be working towards it. "You need to see what combination you can make through these games depending on the conditions. It is a normal process at this level. There is not a single match that you can take lightly. If you need confidence, you need results as well. It boils down to the players eventually. We will try to pick our best XV through these games," the Indian skipper went on to say.

Kohli also put his weight behind Rishabh Pant, who will be the first-choice wicket-keeper with MS Dhoni being rested. "Dhoni’s experience has been a crucial factor for us. But it is a great chance for Rishabh Pant to play more international cricket, show his potential and we all want him to become a consistent performer for the Indian cricket team. MS’ experience remains to be a crucial factor but these youngsters should look forward to the opportunity," Kohli admitted.