Jeff Thomson of Australia was among the most feared bowlers for his pace during his era. And his name can now be added to the growing list of Jasprit Bumrah

Jeff Thomson of Australia was among the most feared bowlers for his pace during his era. And his name can now be added to the growing list of Jasprit Bumrah admirers. Thomson has said that Bumrah has the ability to "burn opposition with raw pace".

"Bumrah is really good. He is someone, more than he has bowled, the better he has got. That's how it should work," Thomson, a leading fast bowler of Australia in the 70s, said about Bumrah in a PTI report.

"He has got raw pace to burn opposition as and when he wants to but he mixes it up. And he is awkward too to read. I haven't seen batsmen reading him well. He is unorthodox and that's what makes him different," added Thomson in the PTI report. 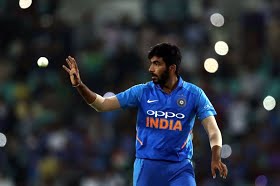 The former pacer went on to state that apart from Bumrah South Africa pacer Kagiso Rabada will be the other bowler to watch out for. As for Australia, Thomson admitted Mitchell Starc's form is a worry but he remains an integral part of the Aussie plans. "I hope Mitchell Starc is on a song during World Cup as of late he has been all over the shop like last summer," Thomson added.

"Starc, if he can bowl well can be as good as anybody in the world. He is a precious man. He needs to bowl quick and at the same time be accurate. He gave too much away in the past," he also stated.

Thomson also admitted that Australia may have missed a trick by not including Josh Hazlewood in the team for the World Cup.