Having lost seven out of 12 T20Is this year and they seventh in T20Is rankings.

Having lost seven out of 12 T20Is this year and they seventh in T20Is rankings.

Bravo is the second-highest wicket-taker in T20s this year with 63 scalps in 54 matches. Russell tops the list with 68 wickets in 51 matches

Pakistan have lost seven out of 12 T20Is in 2016. West Indies, meanwhile, have lost only one of eight T20Is this year. 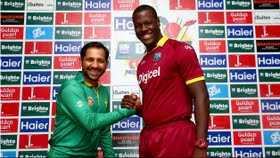