Indian skipper Virat Kohli led from the front with an unbeaten 72 as the hosts went 1-0 up in the three-match T20 series against South Africa at Mohali.

Indian skipper Virat Kohli led from the front with an unbeaten 72 as the hosts went 1-0 up in the three-match T20 series against South Africa at Mohali.

Kohli’s knock came off 52 balls, in a chase of 149, and featured three sixes to go with four boundaries. In the process, he also overtook Rohit Sharma to become the leading run-scorer in T20 internationals. 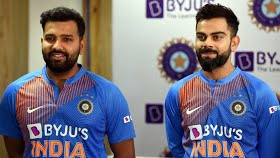 Coming back to the game, Kohli also contributed in the field, taking a brilliant catch off his opposite number Quinton de Kock, who scored a fine 52 from 37 balls.

Batting first, South Africa were comfortably placed at 88 for 1 in the 12th over when Kohli ran to his left from mid-off to pluck de Kock’s catch off Navdeep Saini’s bowling. That shifted the momentum of the match in India’s favor.

While Temba Bavuma contributed an impressive 49 from 43 balls, the middle and lower order struggled. The hard-hitting David Miller could only score 18 from 15. Andile Phehlukwayo and Dwaine Pretorius combine to take 16 runs off Saini's over to push the Proteas to 149.

Deepak Chahar was India’s most successful bowler with 2 for 22 while Saini, Ravindra Jadeja, and Hardik Pandya claimed one wicket each. With the bat, apart from Kohli’s fifty, opener Shikhar Dhawan contributed a vital 40 off 31 balls to get the team off to the desired start in the chase.