At the conclusion of the Dubai Test on Monday, West Indies' fortunes hadn't changed. They registered their seventh loss in a row in an international match. But, even though on-paper, it was another defeat, what stood out for the visitors was the fact that they managed to compete for the first time in the serie

At the conclusion of the Dubai Test on Monday, West Indies' fortunes hadn't changed. They registered their seventh loss in a row in an international match. But, even though on-paper, it was another defeat, what stood out for the visitors was the fact that they managed to compete for the first time in the series, and made Pakistan toil hard, and till the very end, before finally running out of gas. For any side to fight back after a batsman from the opposition has amassed a triple hundred needs a special effort. And, the Windies found the same to not only come back, but even put themselves in a position from where they could push for a come-from-behind victory.

Undoubtedly the most kudos must go to Darren Bravo. He had held things together for the team in the first innings as well. But, his effort in West Indies' second essay was something else. Under pressure, and with Pakistan's bowlers constantly at the Windies batsmen, Bravo managed to hold his own. Even as wickets kept falling from the other end, Bravo did not give up. His resistance frustrated the opposition for sure, especially when a couple of partnerships developed. Sadly for West Indies and Bravo himself, he could not take the battle till the very end. Once he was dismissed, the end came rather swiftly. It was a commendable effort nonetheless.

The performance of leggie Devendra Bishoo was another big plus for West Indies in the losing cause. Ever since he has made a comeback, Bishoo has been a regular feature in the team. He troubled the Australians as well a while back when the teams met. But, to get the better of Pakistan batsmen, and that too in familiar conditions for the latter was a special effort. Remember Pakistan had a massive score on the board in the first innings, and although West Indies put up a credible effort themselves with the bat in their first innings, they were far behind in the race. To come back from that point needed something spectacular, and Bishoo did the same.

The match also saw a much-needed return to form for the struggling Marlon Samuels. He got 76 in the first innings. But, ideally he should have carried on. When out-of-form batsmen get back among the runs, they are supposed to transform them into bigger scores, to prove their hunger. But, Samuels clearly seems to lack the desire to go on and compile big scores. This has been evident throughout his career. Apart from Samuels and Bravo no one really put their hands up with the bat for West Indies, especially in the first innings, which pushed them way behind in the game, before Bishoo brought them back. The failings of openers Kraigg Braithwaite and Leon Johnson, as well as Jermaine Blackwood and Roston Chase also set them back. 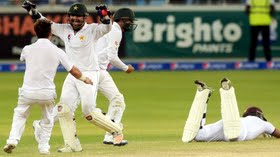 Above all though, it was West Indies' bowling that let them down, particularly in the first innings. The pace bowling trio of Shannon Gabriel, Miguel Cummins as well as skipper Jason Holder all went wicketless as the hosts amassed a massive first-innings score. In fact, apart from Bishoo, who claimed two wickets in the innings, Chase was the only other bowler to claim a scalp. He too sent down more than 30 overs for the same. Overall, West Indies managed only three wickets in 155.3 overs in the first innings. You don't win Tests like that. And so, although Bishoo and Bravo tried their best to resurrect things, it was a mountain too high to climb for West Indies.