A superb unbroken partnership between Skipper Alastair Cook and Matt Prior defied India all through the post tea session to take the Ahmedabad Test into the final day.

A superb unbroken partnership between Skipper Alastair Cook and Matt Prior defied India all through the post tea session to take the Ahmedabad Test into the final day. England has forced India to bat again in this match and have collected a slender lead of 10 runs.

The sixth wicket pair of Cook and Prior has now kept India wicketless for as many as 51 overs! The English Captain resuming the morning at 74* finished unconquered on 168 (from 341 balls with 20 fours). Matt Prior who joined him with England at pressure losing two wickets in two balls got to 84* (from 190 balls with 10 fours). The duo of Cook and Prior has put up 141 runs for the unbroken 6th wicket stand. 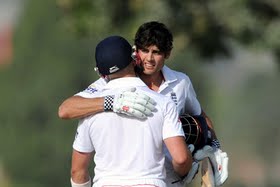 The Indian bowlers are struggling to take wickets and have now been kept on the field for 128 overs in this English second innings. In the last three days, India had to field for more than 200 overs. The pitch by the end of the fourth day’s play has become dead slow and giving enough time for the batsmen to make their adjustments.

Tea Report: Skipper Alastair Cook batted out another session with ease to take his score to 138* (from 267 balls with 18 fours). England lost a couple of wickets to Umesh Yadav in the afternoon session but recovered nicely through the unbroken stand of 65 between Cook and Prior for the 6th wicket. The visitors are now trailing behind by just another 66 runs.

The post lunch session seemed to be going England’s way with Ian Bell looking very promising until he fell across in a flick shot to get trapped lbw by a reversing inswinger from Umesh Yadav about 30 minutes after the break. It was a marginal lbw decision with Bell (22 from 59 balls) struck infront of leg. The very next ball, Umesh Yadav luckily got another lbw decision in his favour from Tony Hill. Samit Patel was out for a first ball duck as he got struck on the pad by a full length inswinger around leg. It was a dubious lbw decision as the ball was not only sliding down leg but had also taken a tiny inside edge.

After the double blow from Umesh Yadav, England settled down through the pair of Cook and Matt Prior (40* from 96 balls with 5 fours). The duo saw through the spin threat off the second new ball. England at Tea are decently placed at 264 for 5 in 100 overs.

Lunch Report: England continued their fightback in the Ahmedabad Test with Skipper Alastair Cook scoring an unbeaten 21st Test century. However, India made inroads taking three wickets including that of Kevin Pietersen and Jonathan Trott to feel good about the match. England at Lunch have brought down the deficit to just 148 runs.

India’s much needed first breakthrough came from Zaheer Khan in the 8th over of the morning when he had Nick Compton (37 from 128 balls) lbw. It was a length ball just pitching in line of the stumps and angling away but swung back late and skidding through to beat Compton’s flick to hit the pad infront of leg. India could have got Compton earlier than this but for MS Dhoni missing out in a stumping chance off Ashwin.

Jonathan Trott walked in with England at 123 for 1 but was under pressure as he was on a pair. Trott got through that comfortably and was easing into a solid partnership with Cook. In the 58th over, Pragyan Ojha who just had a change of ends struck for India when he forced Jonathan Trott (17 from 43 balls) to edge his flighted turning delivery to the keeper. In his next over, Ojha bowled star batsman Kevin Pietersen round his legs to reduce England to 160 for 3. It was a terrible predetermined paddle sweep attempted by Pietersen (2 from 6 balls) to a flighted full ball outside leg and turning square to hit middle.

Build Up to Day 4: It is a crucial day of the First Test at Ahmedabad following England’s wonderful fightback through its opening batsmen in the second innings. The openers Alastair Cook (74*) and Nick Compton (34*) have given plenty of confidence to their colleagues by the way they comfortably handled the Indian spinners yesterday.

England is off to a sound start at 110 for no loss in 38 overs but they still need to score 219 more runs to avoid an innings defeat. We will have to see if the English batsmen can bat right through the penultimate day or not. The Indian bowlers will be a lot fresher after a night’s rest. They would be hoping for the pitch to break up a lot compared to what it was yesterday.