Mumbai Indians outclassed Chennai Super Kings in each department of the game to beat them by 25 runs in the first qualifier of Indian Premier League at Wankhede Stadium, Mumbai.

Mumbai Indians outclassed Chennai Super Kings in each department of the game to beat them by 25 runs in the first qualifier of Indian Premier League at Wankhede Stadium, Mumbai. 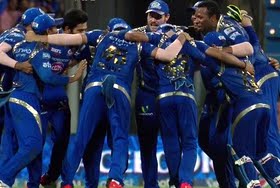 Opting to bat first, Mumbai Indians put a mammoth total of 187 runs on the board, thanks mainly to their openers and Kieron Pollard for an attacking innings. Chennai bowlers bowled the tight line early in the inning and they conceded only 22 runs in the first four overs. But good thing for Mumbai was that they not lost any wicket in that period. Openers cut lose in the fifth over and made full use of the powerplay in the next over too. Simmons and Parthiv scored 13 runs in both fifth and sixth overs to gather momentum in the powerplay. Small boundaries at Wankhede also helped batsmen to score quickly and they tried to hit more sixes than fours. Mumbai Indians scored close to 90 runs in the first 10 overs. Bravo provided Chennai the first breakthrough when Parthiv(35) mistimed the hit off the slower delivery. Simmons too couldn’t carry his inning forward and got out soon. Rohit Sharma and Kieron Pollard were hitting the ball hard and they were looking like taking the game away from Chennai when the score was 135/2 in 15 overs. CSK’s bowlers made a powerful comeback then and took the wickets of Rohit Sharma and Pandaya in successive overs and conceded only 6 runs in two overs. But Pollard turned the momentum in Mumbai’s favour in the 18th over to finish the inning on a high note. He smacked a four and five huge sixes to accumulate 46 runs in last three overs.

Dwayne Bravo took three wickets and he is still retaining the purple cap but unlike his reputation he conceded too many runs in the final overs.

In reply to 187, Chennai’s start was horrible when umpire ruled Smith out leg before wicket on a delivery which was going down the leg side. Smith went back to the dug-out without scoring and Chennai lost their first wicket without any run on the board. Faf du Plessis and Hussey did hit few boundaries but Hussey was clearly struggling to find the gaps. Hussey was caught behind the stumps in the final over of the powerplay. Du plessis and Raina put 40 runs for the third over in five overs and looking that they were carrying their inning forward to make it a good contest. But Harbhajan Singh removed both Raina and Dhoni in the 11th over to shift the balance towards Mumbai. Chennai were not able to recover from this loss and kept losing their wicket at regular intervals. In the end they were all out at 162 in 19 overs to lose the game by 25 runs.

Picking up three wickets, Lasith Maling was the pick of the bowler for Mumbai Indians. Harbhajan and Vinay Kumar took two wickets each.

Winning this game, Mumbai Indians are through to the finals now. Eliminator will be played between Rajasthan Royals and Royal Challengers Bangalore on Wednesday. Winner of this game will take on Chennai Super Kings on Friday in the Qualifier 2.

Man of the Match: Kieron Pollard