Spin twins Abdur Rehman and Saeed Ajmal demolished World no.1 England in just 36.1 overs to their lowest ever total of 72 against Pakistan to spin their side to an unbelievable 72-run victory at the Sheikh Zayed Stadium in Abu Dhabi! Misbah-ul-Haq team with this has clinched an unassailable lead of 2-0 to already seal the Jazz Cup Series in their favour with one more Test match left!

Requiring just 145 for a series-leveling win, the English batsmen were strangled completely by the tight bowling from the Pakistani spin trio of Saeed Ajmal, Abdur Rehman and Mohammad Hafeez. The first casualty for England was in the 15th over with the score at a crawling 21 on the board as Alastair Cook patted a leading edge to the off spinner Mohammad Hafeez. In the 18th over, Saeed Ajmal got lucky as Ian Bell in a backfoot defence bottom edged a top spinner which rolled down through his legs to kiss the stumps.

In the 21st over, Pakistan seriously got back in the match when they reduced England were reduced to 37 for 4 courtesy of a twin blow from left-arm spinner Abdur Rehman! First to go was the tall Kevin Pietersen (1) failing again cheaply in the series as he went right back and got foxed by an arm ball infront of middle. Two balls later, left-handed Eoin Morgan looking to punch off the backfoot was cramped up by the sharp turn and got his leg stump rattled.

England seemed to be putting up a quiet fight with Skipper Andrew Strauss around but only till the 29th over when the opener went right back in the crease and got hit on the pad dead infront by a flat delivery from Abdur Rehman. Andrew Strauss made 32 with 3 fours in 100 balls.

From the 35th over onwards, it was a fast forward mode for England to crash towards a defeat as they collapsed from 68 for 5 to 72 all out in the next 10 balls! What it meant was that England lost five wickets in 10 balls scoring only four more runs in a dramatic collapse! Abdur Rehman was in the thick of the action again as Jonathan Trott (1) went back in the crease but only to get hit on the backpad plumb infront of off by one that turned past the bat. First innings hero with the bat, Stuart Broad lasted only two balls before he got bowled right through the gate in an attempted cover drive to a Abdur Rehman delivery that spun viciously out of the rough! 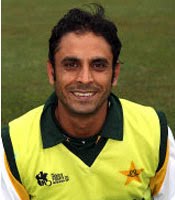 Offie Saeed Ajmal joined the party too to remove his counterpart Graeme Swann (0) by pinning him back in the crease and hitting the pad with a sharp turner. The match was wrapped up with Pakistan taking two wickets in two consecutive balls that were separated by two different overs. Wicket Keeper Matt Prior (18) left with no real partners at the other end gave it away spooning his drive off Saeed Ajmal to covers. In the next ball, James Anderson top edged his slog sweep off Abdur Rehman to get caught at deep backward squareleg. Abdur Rehman finished with dream figures of 10.1-4-25-6 to bowl Pakistan to a superb 72-run victory. He was also the Man of the Match for taking a match total of 8 wickets.

Pakistan Bowled Out : Pakistan has been bowled out for 214 in their second innings leaving England just 145 runs to win the Second Test at Abu Dhabi. England took little time after the lunch break to take the last three Pakistani wickets. First to go after lunch was left-handed Abdur Rehman (10) who missed a sweep off a full length delivery from Graeme Swann which his pad low infront of leg in the 93rd over. Monty Panesar in the 98th over had Saeed Ajmal edging his turning and bouncing delivery to slip and then wrapped up the Pakistani innings by striking the timber with last man Junaid Khan (0) missing an ugly slog.

Monty Panesar finished things with superb figures of 6 for 62 in 38.2 overs to justify his selection in the team ahead of fast bowler Steven Finn.

Lunch Break : Pakistan are on the edge with an overall lead of just 128 runs with three wickets in hand by Lunch on the fourth day’s play at the Sheikh Zayed Stadium in Abu Dhabi. England looking to bounce back in the series by winning this Test took three wickets during an overcast morning session. Andrew Strauss’s team has also got rid of the two overnight batsmen – Asad Shafiq and Azhar Ali to stay in the driver’s seat.

There was an early wicket on offer for England when left arm spinner Monty Panesar got one to turn away sharply to force Asad Shafiq (43 from 138 balls with 5 fours) to edge his defensive shot to slip and break a crucial partnership of 88 runs for the fifth wicket. England almost got their next wicket when Azhar Ali was given out lbw after missing his flick to an off break from Swann but the batsman successfully got the decision reviewed and then got it reversed in his favour.

England then struck with the second new ball with James Anderson producing a snorter of a rising delivery in the 83rd over which was forced to nick behind to the Keeper by the well set Azhar Ali (68 from 195 balls with 8 fours). In the very next over, Pakistan’s last hope – Wicket Keeper Adnan Akmal (13) played a loose drive away from his body to get caught at first slip off Stuart Broad. By Lunch, England was slightly defied by an unbroken stand of 26 between Abdur Rehman (10*) and Saeed Ajmal (11*) for the 8th wicket which took Pakistan to 198 for 7 in 92 overs.