Lanka win should boost us for Australia series: Kohli

"It's quite amazing to have won the series 5-0. We always thought the shorter format is going to be much more challenging. The youngsters and the spunk on the field has worked for us. It's been a complete series for us," Kohli stated on the whitewash.

"We've been playing some good cricket. We did not win three games on the trot in the shorter format before this, and now we have six in a row including the West Indies series," he added.

Kohli also felt the Lanka series will give them confidence as they take on Australia at home in an ODI series. "It will be a challenging series against Australia. We have been playing some good and consistent cricket for some time. So, this series win in Sri Lanka should boost the confidence the boys," added the Indian captain. 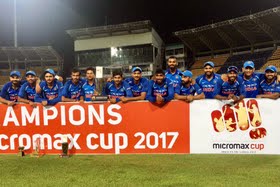 Man-of-the-series Jasprit Bumrah said, "It's my first visit to Sri Lanka and I'm glad I did well. I was focussing on my preparation, I had time to rest before this series and it makes you hungry."

"It's always a dream to play Test cricket, but I'll wait for my chance," he added. He also said that playing alongside Lasith Malinga in IPL has helped, “It's been a long journey with Malinga and I've learnt a lot. I just want to learn and become a better bowler,” admitted Malinga.