Ireland stunned England by five runs via the D/L method in match number 20 of the ICC Men’s T20 World Cup 2022 at the Melbourne Cricket Ground (MCG) on Wednesday, October 26. Bowling first after winning the toss in the Group 1 Super 12 clash, England held Ireland to 157 all out. However, their batting disappointed again. They were 105 for 5 after 14.3 overs when rain forced the game to an end. Ireland were declared winners, being ahead on the DLS score.

Skipper Andrew Balbirnie led from the front for Ireland, top-scoring with 62 off 47 balls. After Paul Stirling fell to Mark Wood for 14, Balbirnie and Lorcan Tucker (34 off 27) added 82 runs for the second wicket. The partnership was broken when Tucker was run out at the non-striker’s end in unlucky fashion. He was backing up when a drive from Balbirnie hit bowler Adil Rashid’s fingers and went on to hit the stumps.

Ireland collapsed after Tucker’s unfortunate dismissal, going from 103 for 1 to 157 all out. Harry Tector was out for a duck to Wood. Balbirnie and George Dockrell (0) then fell to Liam Livingstone off consecutive deliveries. Wood and Livingstone picked up their third each, dismissing Curtis Campher (18) and Mark Adair (4). Sam Curran also helped himself to two wickets, sending back Barry McCarthy (3) and Fionn Hand (1) in the 19th over. Ireland’s innings ended when Joshua Little (0) was caught behind off Ben Stokes. 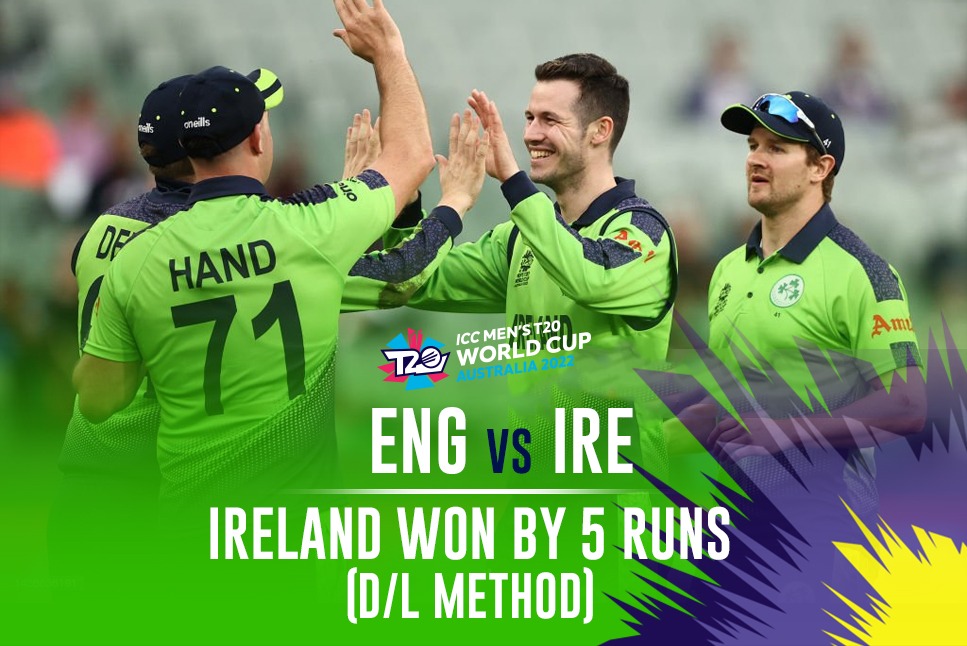 In their chase of 158, England lost skipper Jos Buttler for a second-ball duck as the opener nicked Little to the keeper. Alex Hales also fell to the pacer for 7, skying a pull. England’s hopes suffered a massive blow when Fionn Hand produced a brute to clean up Ben Stokes (6). England were 29 for 3 when Stokes perished, which became 67 for 4 after Harry Brook (18) fell to George Dockrell.

Dawid Malan held the innings together, scoring a defiant 35. However, he too played a poor pull shot off Barry McCarthy and was caught at deep third man. Moeen Ali smashed an unbeaten 24 off 12 balls to raise England’s hopes. However, when rain forced end of the game, England were behind on DLS despite Moeen’s blitz.

Speaking after the special win, Ireland captain and man of the match Balbirnie said, “It is amazing and kind of emotional. We haven't played a game here, to come and play the tournament favorites, with so many big names and to put on a show is very satisfying. We had a great week in Hobart and to do this was at one of the biggest grounds is pretty special. A few (supporters) of them extended their trip, they are so passionate about the game and we are trying to make the sport big in Ireland.”