At the end of day two, Sri Lanka had fought back well with the ball, but Australia were still ahead in the match courtesy the first-innings lead they achieved.

At the end of day two, Sri Lanka had fought back well with the ball, but Australia were still ahead in the match courtesy the first-innings lead they achieved. But, during the course of day three at Pallekele, the scenario had changed rather drastically. Kusal Mendis, of whom not a lot has been said, roared to his way to a sensational knock. In match, where no other player had reached even fifty, Mendis finished unbeaten on 169. That's quite a story. Thanks to Mendis' heroics, Sri Lanka finished the day on a healthy 282 for 6, and a lead approaching 200, which would definitely give Australia jitters, especially after the manner in which they faltered against spin in the first innings. 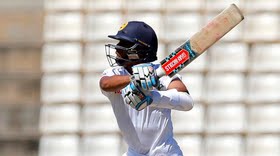 There are some days when everything you touch turns gold. It was such a day for Mendis on Thursday. He walked in with the score at a jittery 6 for 2, and Sri Lanka still facing a significant deficit. But, by the time he walked back, after weather interrupted play for the third day in a row, Sri Lanka were in a decent position to push for a win. Perhaps, they even have a slight edge over the Aussies going ahead. Mendis scored runs all over the wicket. He hit straight, pulled and flicked with conviction, and also employed the cut and sweep to great effect. He hit 20 fours, but reached his century from his only six, a slog-sweep off Nathan Lyon.

While there wasn't much the Aussie bowlers could do, they were left to rue a couple of missed chances. On 66, Lyon struck Mendis in front of the wicket, but the team did not refer the decision. Then, on 142, Mendis offered a tough caught and bowled to Josh Hazelwood, who grassed. Mendis' great knock undid the impressive work by Australian bowlers earlier in the day.

Mitchell Starc's pace was too good for Dimuth Karunaratne in the first over of the day while Steve O'Keefe got past Kaushal Silva with an arm ball. Skipper Angelo Mathews also fell in single figures, caught at bat-pad off Lyon. All this while Mendis was racing past his 50 with ease. What he needed was some support for the hosts to put the Aussies under pressure. Mendis found the helping hand in the post-lunch session in the form of Dinesh Chandimal.

Mendis and Chandimal added 117, to put Sri Lanka ahead. On 24, Chandimal offered a chance, but Starc put down the return catch. It was an uncharacteristic day in the field for Australia. Chandimal was eventually trapped lbw by Marsh. Mendis however found another partner in debutant Dhananjaya de Silva. The two further frustrated the Aussies, before brain fade saw the latter give his wicket away. Even as wickets kept falling around him, Mendis carried on, getting to his 150 just before tea, and in the process, giving Sri Lanka something to cheer after a long time.