Toss: England won the toss and chose to field first 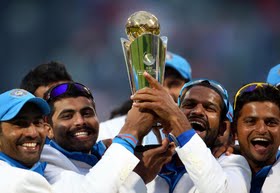 Dhoni the only captain to won, T20 world cup, 50 over world cup and Champions trophy.

Ishant Sharma: "I was quite nervous, things were not going my way but I hold my nerve. I've done it times in the past so maybe that's why he [Dhoni] thought I could do it. We have to say thanks to the crowd, they have been tremendous, there are no words for them."

India held their nerve, England lost theirs. When Morgan and Bopara were going England were in control, but that over from Ishant (who had been expensive) changed the game in the blink of an eye and England could not get back in the game. Did Dhoni really plan to use Ishant as he did? He may explain a little later. India's spinners, Jadeja and Ashwin, were outstanding on a pitch with plenty of assistance. So India have now won the World T20, the World Cup and the Champions Trophy 20/50. It also has to be said that India were the best, most consistent team, in this tournament. This was the only match where their batting struggled and their bowlers bailed them out.

MS Dhoni "When we were batting I just said get close to 130. The shower helped us because the ball was gripping later on. It's important to be positive. I said 'we are the No. 1-ranked team, let's play like that'. I knew the two-overs of Powerplay were crucial. I wanted to make them slog off the spinners. They all handled the pressure really well, in international cricket people talk about technique but it's the ones that deal with the pressure."

Alastair Cook: "The first credit has to go the groundstaff to get a game. We've come up a little short. I though we bowled well, you'd take 130. It's tough to take at the moment. I think both sides found the pitch quite hard to bat on. You are always going to think of different reasons. I'm proud of the way the players have performed in this tournament. With 20-odd needed off 16 balls it was in our hands. There have been a lot of good performances, but at the moment we are a bit devastated."

The Man of the Match isRavindra Jadeja: "I did well throughout the tournament and I was very positive. It was quite difficult to rotate the strike, so myself and Virat just tried to build a good partnership. I was enjoying the bowling on this wicket. The skipper always backs me when I bowl." Jadeja also wins the golden ball for the bowler with most wickets in the tournament.

Shikhar Dhawan wins the golden bat. "I'd dreamt of this, I'm really happy with it. The bouncy tracks suit my game. I worked hard in practice and in the warm-up games. It makes it more special because I was out of the side for a few years." Dhawan dedicates his award to the people caught up in the flooding in India at the moment.