Today, August 1 marks the birthday of former England batsman Graham Thorpe. The left-handed Thorpe was one of England’s finest batsmen during the 90’s, and also among the best the country has ever produced. Injuries and personal issues shortened what should have been a long and successful international career.

Today, August 1 marks the birthday of former England batsman Graham Thorpe. The left-handed Thorpe was one of England’s finest batsmen during the 90’s, and also among the best the country has ever produced. Injuries and personal issues shortened what should have been a long and successful international career. And, while Thorpe only managed to feature in 82 ODIs over a span of decade, he did manage to achieve the wonderful feat of playing 100 Tests for his country, and did so with distinction, scoring 16 hundreds and averaging a healthy 44.66. On his birthday, we look back at his finest moments.

Century on debut for Graham Thorpe 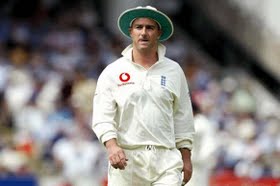 For any Englishman, scoring a century in the Ashes is an unmatchable experience. And when a batsman does so in his debut Test, the achievement becomes doubly delightful. Thorpe has been among the chosen ones to experience this special feeling. The setting was Trent Bridge, Nottingham. Batting first, England were bowled out for 321 in their first innings, with debutant Thorpe managing only six. Australia replied with 373, but England batted better second time round.

No one was surprised with Graham Gooch scoring a hundred. However, coming in at number seven, a youngster named Graham Thorpe frustrated the Aussies with his skillful batting. The left-hander occupied the crease for 335 minutes, and was unbeaten on 114 when the innings was declared. More than the number of runs, it was assured manner in which Thorpe constructed his innings that impressed many. It was the beginning of a rather wonderful journey.

In the 1994 Test at Barbados, it was Thorpe again who swung the game England’s way with a counter-attacking knock, which set-up an easy win for the Englishmen. Batting first, England managed 355 courtesy an Alec Stewart hundred. However, West Indies managed to reply with 304, making it a second innings match. Stewart came up with his second hundred of the game, but the match could not have been won without Thorpe’s counter-attacking 84, after England lost four wickets before crossing 200. The quality of the knock gains credence considering the fact that the opposition had bowlers of the quality of Walsh, Ambrose and the Benjamin brothers. Thorpe’s attacking knock not only gave England the ascendancy, but also time for their bowlers to clean up the Windies in their second innings.

In the 90’s the prospect of England winning on the sub-continent was as little as India triumphing abroad. The change of millennium turned around England’s fortunes though and Thorpe was the major catalyst. On a tough batting surface in Colombo in 2001, where even Sri Lankan batsman struggled, Thorpe notched up 113 and 32, remaining not out in both innings, as England scampered home by four wickets chasing just over 70. The beauty of Thorpe’s knock can be easily gauged from the fact that the entire Lankan team was bowled out for 81 in their second innings.