David Warner after T20 hundred at Adelaide: There's no better place to play

Australian opener David Warner celebrated his 33rd birthday with an unbeaten hundred as the Aussies thumped Sri Lanka by 134 runs in the first T20 at the Adelaide Oval. With the century, the left-hander joined Shane Watson and Glenn Maxwell as the only Aussies with three figures in all formats of the sport. The 134-run victory margin is Australia’s best in terms of runs.

Warner brought up his hundred off the last ball of Australia’s innings, with a single. The southpaw faced 56 balls for his hundred and blasted 10 fours and four sixes. Warner and skipper Aaron Finch, who contributed a quick-fire 64 from 36 balls, featured in a 122-run stand for the opening wicket.

Promoted to number three, Glenn Maxwell then made a rapid 62 from 28 balls, with seven fours and three sixes. Australia finished with a massive 233 for 2 in their 20 overs. Sri Lanka’s Kasun Rajitha conceded 75 runs in four overs, now the most expensive figures in T20 history. It was a horror day for Rajitha as he fell for a second-ball duck later in the day. 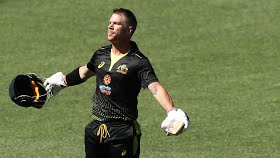 In response to Australia’s massive score of 233 for 2, the Lankans managed only 99 for 9. Adam Zampa was the most successful Aussie bowler with 3 for 14. Pat Cummins and Mitchell Starc chipped in with two scalps each.

Speaking after the brilliant effort on his birthday, Warner was quoted as saying in an ICC report, “We love the people's support and we love the Australian crowds coming out and supporting us and we always try and put on a show for them. The emotions were great. Another year older. Another game for Australia and coming out here in front of an Adelaide crowd. There's no better place to play you know. You've always got a fantastic wicket, the curators are absolutely fantastic here. It's a batting paradise. I absolutely love it out here."

Warner’s excellent effort comes at the back of a horror Ashes 2019 in which he managed only 95 runs in 10 innings, with a highest of 61 and three consecutive ducks.

The second T20I of the series will be played at Brisbane on Wednesday.