India finds itself in a losing position as the big names failed once yet again! James Anderson swung the new ball and the old ball at will to take three top order wickets to put India in dire straits.

India finds itself in a losing position as the big names failed once yet again! James Anderson swung the new ball and the old ball at will to take three top order wickets to put India in dire straits. At Stumps on Day 2, India are 87 for 4 with all hopes on Virat Kohli (11*) to score something significant after a long time. He has Skipper MS Dhoni (8*) at the crease who will be determined to prove his critics wrong by playing a crucial knock on Day 3. If England was too slow with its scoring rate then India’s was even worse with the total of 87 runs coming in as many as 41 overs!

Early in the final session, Graeme Swann broke the good looking 2nd wicket partnership with one that turned in sharply and kicked up to trouble Cheteshwar Pujara (26 from 72 balls) who was given out caught at shortleg. It was a wrong Umpiring decision as the ball missed the inside edge and the glove and hit the elbow before flying off the pad. Ian Bell at shortleg took a great one handed diving catch to reduce India to 58 for 2. 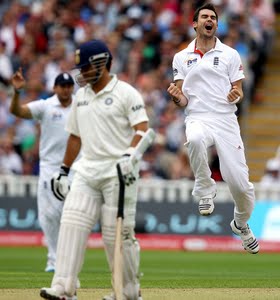 India’s no.4 – the struggling Sachin Tendulkar got out cheaply lasting only 13 balls before he was bowled off an inside edge to a short of length delivery from Anderson which kept low. It wasn’t surprising to see the ball shoot low on this Nagpur pitch nor was the way Tendulkar squatted down in an ugly manner to get bowled which has happened innumerable times in his career. As it has been recently, the veteran was never comfortable at the crease, he was greeted by a couple of sharp turning deliveries from Monty Panesar who was surprisingly taken of the attack but only to be changed with Anderson who went onto dismiss Sachin for the 9th time in his career.

Gautam Gambhir who seemed to be getting into his own perished when his loose drive on the up to an away swinger from Anderson was caught behind to leave India in dire straits at 71 for 4. The left-handed opener batted out 93 balls for an insignificant score of 37.

Tea on Day 2: England fought back after being dismissed for 330 by getting the big wicket of Virender Sehwag in the 12 overs they bowled before Tea. India lost Sehwag for a duck in the first over itself when he played inside the line without any footwork expecting Anderson to come up with a big inswinger but the ball straightened to hit the top of the middle stump. Since then England were defied by a solid partnership between the free stroking Gautam Gambhir (17*) and Cheteshwar Pujara (15*) who took the hosts to 32 for 1.

It took a little over an hour for India to get the remaining three English wickets in the afternoon session. Overnight batsman Joe Root was finally dismissed when he stepped down the track to work a leg break to mid wicket and ended up with a soft leading edge back to the bowler Piyush Chawla. Root scored a patient 73 (from 229 balls with 4 fours) to help his team get past 300. Graeme Swann who went onto score a 5th Test match fifty was lbw to Chawla in an attempted reverse sweep to a quicker one infront of middle and leg. Swann scored a crucial 56 (from 91 balls with 6 fours and 2 sixes).

Piyush Chawla finished the English innings taking his fourth wicket when no.10 James Anderson flicked his flighted delivery to shortleg where Pujara took a smart reflex catch. England were bowled out for 330 with their innings lasting as many as 145.5 overs.

Lunch on Day 2: India are on top in the Nagpur Test after picking up two wickets in the morning session on Day 2 and keeping the scoring down to 78 runs in 32 overs. Overnight batsman Joe Root is still batting solidly and had got his maiden Test fifty. The 21-year-old Yorkshire batsman is on 65 from as many as 200 balls! Giving him company is all-rounder Graeme Swann, who is on 21*.

It took more than an hour for India to find its first breakthrough. A magical delivery from R Ashwin saw the 6th wicket go down as Matt Prior (57 from 142 balls with 6 fours) in a frontfoot defence was playing for the turn around middle but the ball had straighted from round the sticks and angled across to hit the off stump. Prior had put on a crucial stand of 103 runs in 47.3 overs with Root for the 6th wicket.

In a surprise move, Dhoni removed Ashwin from the attack despite taking a wicket and replaced him with Ishant. It turned out to be a magic move from MS Dhoni as Ishant dismissed Tim Bresnan for a 2-ball duck by getting a reversing inswinger to strike the pad and beat a flick shot.

Build Up to Day 2: England resumes the crucial second day’s play at 199 for 5 with all hopes on the overnight pair of Joe Root and Matt Prior to take them to a sizeable first innings total. India on the other hand is desperate to break the partnership and wrap up the English innings as quickly as possible. Everything now boils down to how the Indian batsmen will play sometime today. Run scoring will not be easy because of the sluggish nature of the wicket.

The pitch on Day 2 is quite similar to that of yesterday. The only differences are that it is a bit greener because of the moisture evaporating and the cracks opening up slightly because of the ball hitting the surface.