As expected, South Africa got their first points on the board by overcoming Afghanistan by 37 runs at the Wankhede Stadium in Mumbai on Sunday

As expected, South Africa got their first points on the board by overcoming Afghanistan by 37 runs at the Wankhede Stadium in Mumbai on Sunday. In what was hardly a convincing effort, South Africa again won the toss and batted first and, once more, posted a total in excess of 200. Like England, Afghanistan also came out all guns blazing, with opener Mohammad Shahzad smashing his way to 44 from 19. But, unlike Eoin Morgan’s men, Afghanistan did not have either the firepower or the experience to hold on till the end. Still, they should be proud of the fact that they registered 172 against a decent Proteas attack.

At the halfway stage, chasing 210, Afghanistan were in with an outside chance, thanks to Shahzad’s heroics at the top. They were 103 for 2, and needed to score almost the same amount of runs in the second half of the innings. But, Kyle Abbott dismissed a dangerous looking Gulabdin Naib with a slower ball, which he only managed to cut to the keeper. Not much later, Imran Tahir got a quicker one to sneak past a charging Noor Ali Zadran, who was also looking in good touch. Afghanistan kept going after the bowling, but the wickets also kept falling simultaneously and, in the end, they fell short. 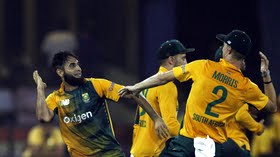 The only hope for Afghanistan to chase down the huge target was if Shahzad sizzled at the top, and the rest carried on his good work. The start was definitely promising as Shahzad sliced a six fine of third man, and then blasted a boundary over backward point in the first over. The next one was even better as 22 runs came off it, bowled by Abbott. He clattered three sixes – two over midwicket and one over long-on. A slower ball was then cut through backward point. Chris Morris gave South Africa the big breakthrough by clattering his stumps with a quick delivery.

Shahzad’s wicket gave South Africa the upper hand, the one they had after they posted a massive score on the board. The Proteas lost Hashim Amla early, as he chipped Shapoor Zadran straight to mid-on. But, Quinton de Kock carried on from where he left off in the previous game, timing his way to 45 from 31 balls. Coming in one down, skipper Faf Du Plessis eased his way to 41 from 27 before AB de Villiers came in and cracked 64 from 29. JP Duminy and David Miller played blazing cameos towards the end to take South Africa past 200.

De Kock set the tone by taking three fours off the opening over sent down by Amir Hamza, comprising a cut, sweep and a drive through the covers. South Africa did not look back after that. Du Plessis came in and got into the act, hitting three fours very early on in the innings. But, du Plessis and de Kock only showed the trailer. The real aggressive act was performed by de Villiers, who hit five sixes in his scintillating knock. Four of them came in one over from Rashid Khan – two of them launched down the ground, and two over midwicket. It left Afghanistan with too much to chase down.