Half a decade back, South Africa would have been clear favourites to win an ODI series against England, irrespective of where the contest was being held

Half a decade back, South Africa would have been clear favourites to win an ODI series against England, irrespective of where the contest was being held. But, things have clearly changed in recent times. Less than a year after England were dumped out of the World Cup, they have come back with renewed vigour. They go into the series having overcome the Proteas in the Tests. More significantly, they defeated Pakistan 3-1 in the ODIs in UAE. On the other hand, South Africa remain a strong force in the shorter formats as they outplayed India in India in ODIs and T20s too.

While the format will be different, South Africa will go into the match having defeated England rather comprehensively in the final Test. As such, they would have some momentum as the core of the team remains the same. Skipper AB de Villiers will be the key for South Africa as he has been for a few years now. He has played some unbelievable knock in one-dayers in recent times, and will be looking forward to get back among the runs after the uncharacteristically underwhelming show in Tests against England, which culminated with a pair. De Villiers is, after all, the number one-ranked ODI player. 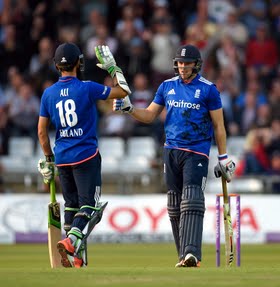 Hashim Amla too will look to continue with the form he rediscovered in the Tests. When he scores runs, he makes it big even in one-dayers. In Quinton de Kock, they have an opener who loves to score hundreds; he already has eight to his name in a short career. The series will be significant for Faf du Plessis, who had a great ODI series against India, but has struggled in the longer formats since. With pace spearhead Dale Steyn being ruled out, South Africa will look up to Kagiso Rabada and Morne Morkel to deliver with the ball. Leg-spinner Imran Tahir too is expected to make the cut.

England will hope Test failures don’t affect Alex Hales as he returns in coloured clothing. Hales managed only a solitary fifty in his debut Test series, but he had a good one-day series in the UAE, where he even registered his maiden ODI hundred. He will be partnered by Jason Ray, who also was a success in the UAE. England’s middle order looks strong on paper, with the ever-in-form Joe Root to be followed by skipper and cheeky batsman Eoin Morgan. Ben Stokes and Jos Buttler provide England the x-factor down the order, and there is Moeen Ali as well for support.

In the bowling, England will be missing the services of Steven Finn, who was among their best pacers in the Tests. But, it is not bad news after all since he has replaced by Stuart Broad, who makes a comeback after being dumped after the World Cup disaster. Chris Woakes and Chris Jordan are the other pace options they have, apart from Stokes of course. One among left-armers Reece Topley and David Willey could also play. England have better variety in the spin department, with the leggies of Adil Rashid to complement Moeen’s off spin.