Australia clubbed a ragged West Indies 5-0 in the ODIs played at home. Rarely were the Aussies in any sort of trouble as they out-powered Darren Sammy’s men game after game. Although it was a highly shabby performance from the West Indians...

Australia clubbed a ragged West Indies 5-0 in the ODIs played at home. Rarely were the Aussies in any sort of trouble as they out-powered Darren Sammy’s men game after game. Although it was a highly shabby performance from the West Indians, it was a fact that the home sidewere superior throughout and found a new hero in every match, which aided their cause as they drubbed the opposition in each game with a fair degree of comfort. Here’s a look at five Australian heroes from the five matches.

The Aussie left-arm speedster ran amok at Perth and the West Indies batsmen had no answer to the queries posed by him. En route to his brilliant five-wicket haul, Starc dismissed Kieran Powell for 11, Ramnaresh Sarwan, Dwayne Bravo and Kieron Pollard for a duck as, batting first, the Windies were blown away for 70. Starc found good support from Clint McKay and James Faulkner, who grabbed the other five wickets as Australia eased to a nine-wicket win. In hindsight, West Indies could not recover from the pounding. 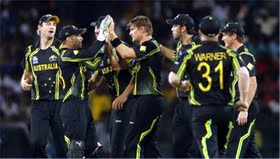 On this occasion, Australia batted first and found themselves in serious trouble, losing six wickets for 98. Bailey then played the innings of his life to rescue the home side. During the course of his unbeaten 125, Bailey faced only 110 balls and slammed ten boundaries and four sixes. It was a counter-attacking knock at its best as West Indies had no answer to what was thrown at them. Thanks to Bailey’s genius, Australia recovered to 266 for 7 and, with Starc grabbing his second five-for in the row, quashed the West Indian challenge without much trouble in spite of Powell’s 83.

The Australian opener played a masterly knock in this match at Canberra, as the home side clinched the series without much trouble. Batting first, the Aussies blasted 329 in their 50 overs, with Watson bludgeoning 122 from 111 balls with 12 fours and two sixes. Phillip Hughes chipped in with 86 as the Windies were mauled. The visitors replied with spirit for a change, Darren Bravo contributing 86, but still fell way short of the target.

Kieron Pollard was the man of the match in this dead rubber for his magnificentton under pressure, but it was the left-arm pacer for Australia, who made the significant difference in the game. Batting first, West Indies lost their first three wickets with only 17 runs on the board – Johnson picking up all of them; Powell for 9, Johnson Charles for zero and Darren Bravo for 4. West Indies could never recover from the disastrous start as Australia got home by five wickets.

Yet again, Australia recovered from a dodgy position to post a match-winning total. The Aussie openers were dismissed with two on the board, and were soon four down for 82. However, Voges kept the fight up for the Aussies from one end. His knock featuring 10 fours and two sixes undid all the good work done earlier by the Windies. With support from Haddin and Faulkner, Australia recovered to post 274 for 5. West Indies could not make a match out of it in spite of a century from Charles, as Australia completed the 5-0 whitewash.