KXIP vs CSK Preview: Punjab look to cause another upset

IPL 8 KXIP vs CSK Preview, Live Scores: There really isn't much at stake in match number 53 of the Indian Premier League to be played between Chennai Super Kings and Kings XI Punjab at Mohali on Saturday.

There really isn't much at stake in match number 53 of the Indian Premier League to be played between Chennai Super Kings and Kings XI Punjab at Mohali on Saturday. And, the reason for the same is rather straightforward. In spite of the shock loss against Delhi Daredevils, Chennai are still firmly placed at the top of the points table, and are all but assured of a place in the playoffs. The situation is exactly the reverse for Punjab. They managed to beat a strong Royal Challengers Bangalore in their last encounter, which was reduced to 10 overs per side. But, in spite of the win, they remain last in the points table. 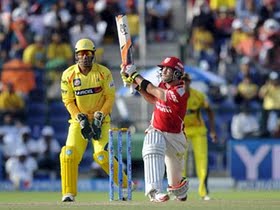 Even though Chennai would stay in contention for the top four berth even if they go down to Punjab, they would be eager to finish with a win, and progress to the playoffs stage with the winning rhythm. Also, finishing in the top two gives the franchises a significant advantage as they get two chances to play for a finals berth. That should encourage Chennai to go all-out against Punjab. Also, their batting performance against Delhi Daredevils was unbelievably ragged. While it can be looked at as a one-off, Chennai will like to believe that they missed a golden opportunity to strengthen their position further.

Consolidation with the aim of getting things back in order should be what Chennai must aim for against Punjab. The flashing blade of Brendon McCullum will be one of the key ingredients Chennai would be looking at. Also, they would be looking for more runs from Dwayne Smith, who has gone off the boil. The middle order of Suresh Raina, Faf du Plessis, MS Dhoni and Dwayne Bravo also need to deliver. Bravo will be key with the ball too. Against Delhi, Ishwar Pandey impressed, but Ashish Nehra, Mohit Sharma and Ravindra Jadeja have been doing a good job overall.

As for Punjab, they would look to cause another upset having overcome Bangalore, in an endeavour to salvage some pride. Of course, the task would be much tougher against Chennai if the game lasts the full 40 overs. It is sad in a way that last year's finalists are featuring in an inconsequential game at this stage of the event. But, the fact is that Punjab have been a pale shadow of the team that impressed last year. If you take out David Miller, their star performers like Glenn Maxwell, George Bailey and Virender haven't come to the party.

The biggest plus for Punjab in the lucky win against Bangalore was the all-round success of Axar Patel. The left-arm spinner hasn't been having a good time with the ball, one of the many factors behind Punjab's lacklustre showing. Against Bangalore however, he shone with the bat, and it gave him confidence to do well with the ball as well later. With the struggling Mitchell Johnson being released, Sandeep Sharma and Anureet Singh get another opportunity to prove their worth on their own. Do they have the fight to pull off another upset?