The only way the Sri Lankans could have competed with the Aussies in the Tests Down Under would have been if their experienced batsmen warmed up to the task and stood tall against the Australian bowlers.

The only way the Sri Lankans could have competed with the Aussies in the Tests Down Under would have been if their experienced batsmen warmed up to the task and stood tall against the Australian bowlers. And although one or two batsmen impressed on the tour, it was only in parts and, as a team unfit, their batting was a complete failure. In comparison, their bowling was competitive, but apart from Rangana Herath, they did not have much wicket-taking quality in their attack, as a result of which they were thrashed in all three Tests.

A review of the series gives us a better idea of the failings of the Lankans with the bat and their consequent struggles in the series. Tillakaratne Dilshan began with a blazing hundred, but he did not even make a half-century in any of the other five innings. Considering Dimuth Karunaratane is only just beginning his international journey, it was imperative for Dilshan to do much better. Karunaratane himself played a fine knock in the final innings of the Test series, which should stand him in good stead for the future challenges, but it did not have any impact on Lanka’s fortunes in the series. 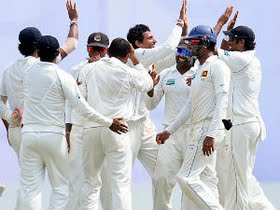 Kumar Sangakkara was undoubtedly the visitors’ most fluent batsman in the series, but he could not get the big scores, which hurt Lanka’s chances in a big way. The injury to him meant that he couldn’t be part of the third Test, which significantly reduced any chances Sri Lanka had of preventing whitewash. Mahela Jayawardene, playing in his last series as captain, was once again found out away from home. He got half-centuries in both innings of the third Test, but by that time the series was out of Lanka’s grasp. He had a horror time with the DRS as well, just like what Anil Kumble had against Jayawardene’s Lankans back in 2008.

Thilan Samaraweera did not do his reputation of a batsman whose game is suited to sub-continental conditions any good by failing to register even a half-century in the series. With Samaraweera himself contemplating retirement, the time has possibly come for the Lankans to look beyond the veteran middle-order. The series was also a major test for Angelo Mathews, the captain in waiting. Unfortunately, he had pretty much a forgettable series, with only a solitary half-century to show. His medium-pace bowling did not trouble the Aussies either. Mathews will have a tough task to pick himself, and the team, up from here. On the positive side, the Lankans would have been pleased to see Lahiru Thirimanne grab his chance at Sydney with a fighting knock.

A lot wasn’t expected of the Lankan bowling, but Rangana Herath lived up to his reputation of being the best in the world at present. Fast bowler Chanaka Welegedara was impressive in the opening Test, but the injury to him did not help matters. The rest did well in phases, but at the end of the day, they just did not have runs to play with, which made the major difference.