Australia vs South Africa Tests: The star performers for the Proteas

South Africa defeated Australia 2-1 in the three-match Test series played in the latter’s home ground. While the Proteas could not inflict a whitewash as the Aussies fought back hard in the dead rubber at Adelaide, in the day-night encounter, the visitors were still the superior of the two teams

South Africa defeated Australia 2-1 in the three-match Test series played in the latter’s home ground. While the Proteas could not inflict a whitewash as the Aussies fought back hard in the dead rubber at Adelaide, in the day-night encounter, the visitors were still the superior of the two teams. Here’s a look at the men who made the victory possible for South Africa. 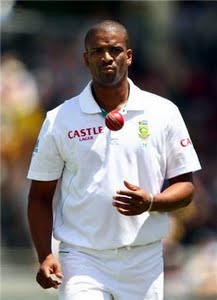 Vernon Philander: He starred with both bat and ball to be adjudged the man of the series. With the ball, he claimed 12 wickets at an impressive average of 23.58 and a strike rate of 51.7. With the bat in hand, he chipped in with crucial runs, 136 in all, including the match-defining 73 at Perth, to finish with an average of 27.20. He also compiled a useful 32 at Hobart. But, it was his bowling effort that stood out. Philander was incisive throughout, picking up 4 for 56 at Perth and 5 for 21 at Hobart, the latter pretty much sealing Australia’s faith.

Quinton de Kock: The wicket-keeper batsman was by far the most consistent batter in the series. He finished as the second-highest run-getter with 281 runs from five innings at an average of 56.20 with one hundred and two fifties. In the runs tally, he was behind only Usman Khawaja, who crossed the 300-figure mark. He made 84 and 64 in the first Test at Perth, and followed it up with a hundred in the second Test at Hobart. He failed in both innings at Adelaide, and it coincided with South Africa’s loss, proving how crucial he was to the team’s cause in the series.

Kagiso Rabada: The rising fast bowler never ceases to impress. He was among the wickets again, claiming 15 in all at a brilliant average of 22.40 and a strike rate of 43.2. He was the second best wicket-taker in the series after Josh Hazlewood, who claimed 17. Rabada claimed 5 for 92 at Perth, 4 for 34 at Hobart and 3 for 84 at Adelaide. There was hardly a spell in which he let the pressure ease off the Aussies.

Kyle Abbott: Coming in for Dale Steyn, he did an incredible job, so much so that South Africa never felt the absence of Steyn, except for perhaps at Adelaide, where they could not run through the Aussie line-up. A fired up Abbott ended with 13 wickets in two Tests at an average of 14.84 and a strike rate of 34.5. He 6 for 77 at Hobart blew Australia away, after he had already taken three wickets in the first innings. Abbott shone in a losing cause at Adelaide as well, with 3 for 49.

Temba Bavuma: As a lower order bat and as a stupendous fielder, Bavuma made a serious impression. Who can ever forget the gravity-defying run-out he pulled off against David Warner? With the bat, he chipped in with 162 runs at an average of 32.40 with a couple of key fifties. He made 51 at Perth and 74 at Hobart, both in winning causes.