Aided by a stunning innings of 80 by Sabbir Rahman, Bangladesh overcame a disastrous start to post a reasonable 147 for 7, enough for them to clinch the contest against an under-performing Sri Lankan batting outfit, by 23 runs at Dhaka on Sunday

Aided by a stunning innings of 80 by Sabbir Rahman, Bangladesh overcame a disastrous start to post a reasonable 147 for 7, enough for them to clinch the contest against an under-performing Sri Lankan batting outfit, by 23 runs at Dhaka on Sunday. After winning the toss, Bangladesh decided to bat first in the crucial encounter. Rahman’s superb knock of 80 came off merely 54 balls, and featured in a significant 82-run fourth wicket stand with Shakib Al Hasan (32). In response, Sri Lanka were well placed at 76 for 1, but Dinesh Chandimal’s dismissal yet again resulted in a batting collapse, as Lanka finished on 124 for 8.

Tillakaratne Dilshan fell early in the chase again, trying to hit out against Shakib having made 12, but only manage to sky the ball high in the air. This was however followed by a mature 56-run stand for the second wicket between Chandimal and Shehan Jayasuriya. For the second game in a row, Chandimal top scored for Lanka, but could not take the team home after getting a start. Having made a run-a-ball 37, he reverse swept Mahumdullah straight to Taskin Ahmed at deep point. Soon, Shakib sent back Jayasuryia, as the batsman raced down the track, and could not make contact with a wild swing. 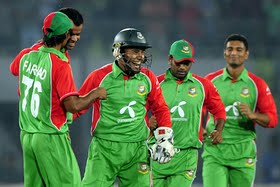 At 78 for 3, the match was evenly poised, but Bangladesh soon raced ahead as wickets kept crumbling for Sri Lanka. Thisara Perera, who had come in for Lasith Malinga was trapped in front by Mustafizur Rahman for 4. From there on, it was all Bangladesh. Al-Amin Hossian was again brilliant at the end, finishing with 3 for 34. In fact, all the Bangladesh bowlers finished with impressive figures. Shakib ended with 2 for 21, while Rahman and Mortaza were economical. For the second match in a row, the middle and lower order let the Lankans down, and this time it resulted in a defeat.

Earlier, Sabbir was in his elements right from the time he entered the crease. Sabbir came in to bat in the very first over of the match, and departed in the 16th over, having taken Bangladesh past 100. In the fourth over of the innings, he smashed Nuwan Kulasekara for three fours and a six to give the hosts some momentum. He whipped the first ball through midwicket, smashed the next one over long on for a maximum, followed it up by driving one through covers, and hit another four in the same over, by chopping one between point and short third man. Sabbir then proceeded to hit three consecutive fours off Thisara Perera, even as wickets kept falling at one end. This was until Shakib joined Rahman at the crease.

Sabbir brought up his fifty by sweeping Jayasuriya for a six. He dismissed the next two balls for the fours as well. Rahman eventually fell for 80, having smashed Dushmantha Chameera for a big six over deep midwicket. After his dismissal, Shakib chipped in with a couple of more boundaries. Yet again, Mahmudullah provided the finishing touches for Bangladesh with a quick, unbeaten 23 from 12. But, it was Sabbir’s knock that eventually made the big difference.