We had plans for Jos, Arshdeep executed it well: Ashwin

After two consecutive losses, Punjab returned to winning ways by defeating Rajasthan by 12 runs at Mohali on Tuesday. Batting first

After two consecutive losses, Punjab returned to winning ways by defeating Rajasthan by 12 runs at Mohali on Tuesday. Batting first Punjab posted 182 for 6 and then restricted Rajasthan to 170 for 7.

While Lokesh Rahul celebrated his World Cup selection with a half-century, David Miller contributed 40 before skipper Ravichandran Ashwin did the star turn with both bat and ball. After blasting 17 in 4 balls, he claimed 2 for 24 with the ball. Despite a half-century from opener Rahul Tripathi and a quick 33 from Stuart Binny at the end, Rajasthan fell short.

At the post-match presentation, Ashwin was all praise for pacer Arshdeep Singh, who took two big wickets including that of Jos Buttler on his Indian T20 Cricket debut. "Very tough to defend here, the wicket generally gets better in the second half. We probably thought we were 10-15 runs short on this pitch." 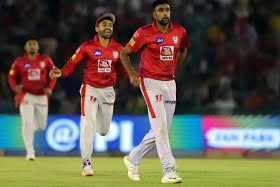 He further added, "I thought Arshdeep bowled really well in the first few overs. We had some plans for Jos and he really executed well."

"He can actually swing the ball both ways and for a left-hander to swing both ways is a massive advantage in the first six as we have seen with Deepak Chahar in the Chennai. We are looking forward to Arshdeep doing some great things in the tournament," an optimistic Ashwin said about the youngster.

Ashwin who has adjudged the Man of the Match also explained what's working for him. "For me, it's about getting various lengths with different speeds and trying to get the batsman with undercutter and reverse carrom. I worked on a lot of things despite people actually calling me for trying too many things, I kept on going."

"Discussion between me and Stuart was take it deep. Tripathi started really well. Should learn from our mistakes. These things happen in T20 cricket. Our two legspinners in the middle overs were brilliant. Jofra's four overs were critical," Rahane added.