When Gary Kirsten left the Indian squad following the 2011 World Cup winning campaign at the Wankhede Stadium in Mumbai, he went away with a legacy. Under the Kirsten and M S Dhoni combo India had rose to the number one side in Test cricket and also became World Champions in the 50-over format.

When Gary Kirsten left the Indian squad following the 2011 World Cup winning campaign at the Wankhede Stadium in Mumbai, he went away with a legacy. Under the Kirsten and M S Dhoni combo India had rose to the number one side in Test cricket and also became World Champions in the 50-over format. They even managed to draw a tight series in South Africa, and beat Australia at home. Without doubt, the incoming coach had an unenviable task. He had to try andmaintain India’s good run. Some losses here and there could have been forgiven, but anything less than that would have been unacceptable. 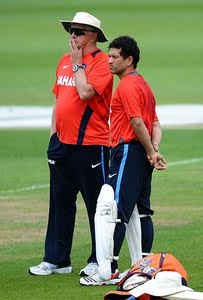 It is often said that the captain and coach are only as good their team. However, by any stretch of the imagination, current India coach Duncan Fletcher’s stint has been a failure so far. Under him, India have tasted failures in England, Australia and now at home as well. They have struggled in ODIs as well as T20s since the 2011 World Cup win. Their disappointing showing inthis year’s World T20 held in familiar conditions in Sri Lanka was only a reaffirmation of their dwindling status in world cricket.

One doesn’t want Fletcher to come out and defend the team’s continuous shoddy performances. Even Kirsten was a man of few words, but he still made a conscious effort to be an omnipresent figure when he was around in Indian cricket. He spoke out when needed – about the vision he had for the Indian team, andwas also seen at press conferences at times explaining the team’s performance, and was even openly vocal of his dislike for the IPL. He, in fact, even blamed the tournament for India’s shoddy showing at the 2009 World T20, when he was the coach. It was another matter that the BCCI censured him for the same. If only they had paid heed to his advice!

In contrast to the South African, Fletcher has never made any effort to be held accountable. It can be argued that the team itself is playing so badly that no matter how good a coach, he cannot turnaround the team’s fortunes. At the same time though the Indian fans need to know what efforts Fletcher is making to arrest India’s slide, if at all. Is he helping out sort the flaws in Yuvraj Singh’s technique? Is he having a word with Virat Kohli about his poor shot selection? Dhoni said after the Eden Gardens loss that he won’t quit as that would mean he’s running away from responsibility. Then again, what are Dhoni and Fletcher doing as a combination toimprove India’s never-ending run of losses?

All these questions can be answered only if Fletcher makes his presence felt around Indian cricket. We must know what the former England coach has in mind for the Indian team, and the plans and schemes he is working on. As of now, he is a mere paid spectator as India’s performance goes from bad to worse.