Taking a dig at Board of Control for Cricket in India (BCCI), Pakistan Cricket Board chairman Shaharyar Khan said India are scared of playing Pakistan.

Taking a dig at Board of Control for Cricket in India (BCCI), Pakistan Cricket Board chairman Shaharyar Khan said India are scared of playing Pakistan.

Khan said so during a ceremony hosted by Pakistan Prime Minister Nawaz Sharif to honour the Champions Trophy winners in Islamabad on Tuesday.

"After our win, we challenge India to come and play bilateral cricket with us. They don't play us, they are scared of our team. They say we'll play you in ICC matches but they won't play us otherwise," Khan was quoted as saying by cricket portal PakPassion. 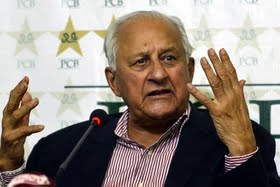 Pakistan beat India by 180 runs in the final of the Champions Trophy. India has not played a bilateral series with Pakistan since 2007. PCB has even sent a legal notice to BCCI claiming damages to the tune of USD 60 million (Rs 387 crore approx).

At the ceremony, Shaharyar named Sarfraz Ahmed Test captain. "I take this opportunity to announce Ahmed as our Test captain in addition to one-day and Twenty20 captain," he said.

Sharif rewarded every member of the Champions Trophy winning team with a prize of 10 million rupees ($100,000).