Australia in the driver’s seat despite second innings collapse

South Africa battled hard on the third day’s play at Brisbane right till the end but the Aussies still hold the edge over them with an overall lead of 273 runs with still five wickets in hand.

South Africa battled hard on the third day’s play at Brisbane right till the end but the Aussies still hold the edge over them with an overall lead of 273 runs with still five wickets in hand. A result is very much on the cards of an Australian victory in this Adelaide Test with two full days left unless there is a massive partnership from the South African top order in the final innings.

Resuming the third day’s play at a solid 217 for 2, South Africa failed to cash onto it and got bowled out by Tea. Skipper Graeme Smith could add only 11 more runs to his overnight score of 111. Peter Siddle rocked the Proteas with the big wickets of Smith and AB de Villiers (1) to reduce them to 240 for 5 early in the morning. Hilfenhaus joined the party taking a couple of wickets to have the South Africans staring at a follow on at 250 for 7. 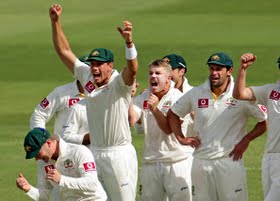 Fortunately, the South Africans were bailed out for almost a session thanks to the entry of their injured warrior Jacques Kallis. Along with debutant Faf du Plessis, Kallis ensured that the South Africans were in a position to avoid the follow on with a fighting partnership of 93 runs. Kallis who came in at no. 9 made a crucial 58 (from 93 balls with 10 fours and a six) while Faf du Plessis worked hard for his 78 (from 159 balls with 13 fours and a six).

Although the Aussies ended up with a significant first innings lead of 162 runs they lost their strike bowler James Pattinson through a side injury. Pattinson is doubtful to take any part in the rest of the Test match. Australia in their second innings got a wonderful start of 77 in 16.1 overs before David Warner (41 from 60 balls) was caught at covers off Rory Kleinveldt. The same bowler then had Rob Quiney nicking into the slips for a two ball-duck. Rory went onto take his third wicket when opener Ed Cowan (29) was cleaned up through the gate.

The Aussies from 77 for no loss slipped to 91 for 3 thanks to Kleinveldt’s triple blow. Soon Dale Steyn came in to perhaps end Ricky Ponting’s international career with the veteran once again failing to come up with a good score! Ponting this time scored 16 before he played onto his stumps. By the close of play, Morne Morkel got rid of night watchman Peter Siddle to reduce the hosts to 103 for 5. The hosts still have the in-form Skipper Michael Clarke and Michael Hussey at the crease to stretch their overall lead tomorrow.