When the Sharjah Test began, the only question on people's mind in relation to the series was if Pakistan could clean sweep the series 3-0. They had easily overcome the Windies in the shorter format

When the Sharjah Test began, the only question on people's mind in relation to the series was if Pakistan could clean sweep the series 3-0. They had easily overcome the Windies in the shorter format, and had tasted victory in the first two matches of the Tests as well. As such, they were favourites to clinch the final Test at Sharjah as well. For the first time in many years, Pakistan had displayed unparalleled consistency in a series. But, a hint of complacency seemed to have set into their game in the final Test, and that resulted in the kind of performance which did not allow them to finish off things on a high.

Although they lost the series, West Indies would be proud of their effort at Sharjah. It was the first time in many years that they had beaten a better ranked team. The hero of the game was undoubtedly Kraigg Braithwaite. The West Indies opener has a reputation of coming up with some dogged knocks. But, he has had a pretty average career thus far, and no one really expected Braithwaite to come up with the kind of performance he did in the final Test. Braithwaite batted superbly in the first innings to carry his bat. It was thanks to his hundred that West Indies gained the significant lead. In the second innings as well, he guided the team past the finish line.

While Braithwaite's effort was the standout one, there were a couple of other important contributions as well, which played a role in Windies' rare win. Skipper Jason Holder's second innings burst must count among them. After Braithwaite ensured West Indies got the lead, Holder burst through the Pakistan top and middle order to leave them in dire-straits. The spell put the Windies further in the ascendancy, and eventually saw Holder win his first Test as captain, after what has seemed an eternity. Devendra Bishoo picked up seven wickets in the match, which was a big contribution even as Shane Dowrich made an unbeaten half-century to guide Windies home in company of Braithwaite.

Although Pakistan conceded the lead, they basically lost the game after they batted extremely poorly in their second innings. There wasn't a lot of pressure as such on Pakistan, as they hadn't conceded a huge lead. Yet, they did not perform up to expectations in the second innings. The early losses of Sami Aslam, Asad Shafiq, Misbah-ul-Haq and Younis Khan hurt them big time. After all, they are among the four key batsmen in the team. Azhar Ali held one end up commendably while Sarfraz Ahmed also contributed runs lower down the order. But, the damage had already been done. 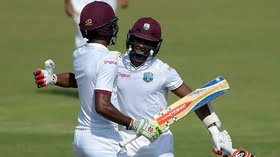 If Pakistan look back at their batting performance in the Test, they will rue the fact that a number of starts weren't converted, and not a single batsman registered three figures. In fact, in the first innings Aslam, Misbah, Younis and Sarfraz all got fifties, yet Pakistan could not cross 300. And, in the second innings as well, Azhar's 91 was the only big score. Complacency crept into Pakistan's bowling and fielding as well. They put down a couple of important catches at key moments. There was a brief spark when wickets fell in a heap in West Indies' chase. But, lack of runs eventually returned to haunt Pakistan.