Australia continued their domination on day two of the first Test against West Indies at Hobart and, like on the opening day, this time as well as there was precious little for the visitors to cheer

Australia continued their domination on day two of the first Test against West Indies at Hobart and, like on the opening day, this time as well as there was precious little for the visitors to cheer. Adam Voges and Shaun Marsh carried on to break a few records en route to their marathon stand. Marsh missed out on what would have been his first double century in Test cricket while Voges was perhaps denied of a 300 only because Steven Smith decided to declare. Boredom could have been the only other reason Voges could have lost his wicket to.

It was yet another terrible performance by the West Indian bowlers. Such a shabby effort at the top doesn’t augur well for the rest of the series. Yes, the fact that Shannon Gabriel again wasn’t available hurt them. But, in Kemar Roach and Jerome Taylor they have two highly experienced pace bowlers, who have troubled the best of international batsmen on their day. There has never been any doubt over their ability, but inconsistency remains their bane. And, at Hobart as well, their lack of application came to the fore as the Aussie duo of Marsh and Voges garnered easy runs. 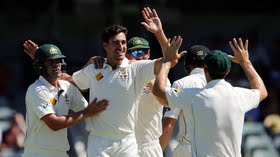 Speaking of Marsh and Voges, both would admit that they were least challenged by the West Indian bowling. In fact, they couldn’t have asked for a weaker bowling attack to get runs against. At the same time, while there wasn’t much challenge in scoring against this bowling line-up, Voges and Marsh must still be credited for not throwing their wickets away, and making maximum use of the opportunity that came their way. Voges, in particularly, was highly impressive. He has had to wait long for his chance at the Test level, and he’s making sure he doesn’t let the opportunity slip by.

Another Aussie who should be credited for his effort on the day is off-spinner Nathan Lyon. Even as the West Indian bowlers struggled to make any sort of impression on the pitch, Lyon responded with three scalps, all of them earned through enticing bowling. The experienced slow bowler is nowhere in the same league as Shane Warne or even Stuart MacGill for that matter, but in his own quite manner he has made a mark. Having 170 plus wickets going into his 50th Test is quite a credible achievement for a moderately talented player like him.

The only reason for West Indies to cheer for on the day was the effort of Darren Bravo, who was six runs short of a well-deserved hundred when stumps were drawn. Bravo demonstrated that it was possible to score runs on the pitch without much trouble even against the Aussies. What hurt West Indies, apart from of course their bowling, was the sustained poor form for Marlon Samuels. Later in the day, Roach also proved how easy it was to bat on the pitch. The only way West Indies can survive defeat on this surface is if Bravo gets a big hundred, and the tail can support him in the fight.