New Zealand was braver than us, deserved to win: Kohli after India get knocked out of World Cup 2019

Having started the tournament as one of the favorites, India were knocked out of World Cup 2019 by an inspired New Zealand side. Having battled their way to a challenging

Having started the tournament as one of the favorites, India were knocked out of World Cup 2019 by an inspired New Zealand side. Having battled their way to a challenging 239 for 8, the Kiwis then restricted India to 221, thanks to a stupendous bowling effort from Matt Henry (3 for 37) with excellent support from Trent Boult (2 for 42).

India fell way behind in the chase in the first four overs itself when they were reduced to 5 for 3 with Rohit Sharma, Virat Kohli, and Lokesh Rahul all falling for 1. Although Rishabh Pant and Hardik Pandya began a comeback of sorts and Ravindra Jadeja (77 from 59 balls) played an exceptional knock in the company of MS Dhoni (50 from 72), the dismissals of the latter two brought New Zealand right back into the game.

Pondering upon the heartbreaking loss in spite of finishing table toppers, India skipper Virat Kohli decided to give full credit to New Zealand. "They were really good with the new ball and hit the right areas. I think it was the skill level on display was there for all to see. New Zealand deserves it, they put us under more pressure. Come to the knockouts, it's anyone's game and New Zealand showed more composure. They were braver than us and deserve to win," Kohli admitted. 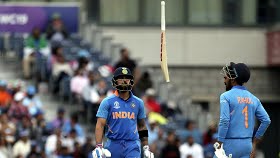 Asked about the superb partnership between Ravindra Jadeja and MS Dhoni, Kohli added, " I think Jadeja had a really good couple of games and it's his performance today that's a huge positive for his skill-set. MS had a good partnership with him, and again a game of small margins, run out by a small margin."

On how the team is taking the painstaking loss, Kohli said it feels bad that 45 minutes of bad cricket puts you out. "At times, I think our shot-selection could have been better. Otherwise, we played a really good brand of cricket. Really proud of the way we competed throughout the tournament. Thanks to all the fans, thanks for coming out in huge numbers," Kohli signed off.

On the other hand, New Zealand skipper Kane Williamson stated he was confident that 240 could put India under pressure. "it wasn't a high-scoring track. We thought that 240-250 will help us to put India under pressure. The guys were able to do that in the middle and at the back end without going too hard. Lot of it was on the conditions, with the rain around yesterday and whether it changed the conditions. With the new ball, our bowlers try to move the ball off the seam or in the air," Williamson explained.

The New Zealand skipper praised Jadeja and Dhoni for their brilliant partnership. "They showed why they are a world class side when they took it really deep to a position where they could have won it through MS and Jadeja. Our character was tested and we came out on top. We've seen conditions be really tricky at times and in some games, we didn't play our best cricket but guys weren't disheartened and backed ourselves. On a particular day, anything can happen and it was a game of small margins. Pleased to come across the line," the Kiwi skipper went on to add.