NZ vs SA Review: New Zealand-South Africa clash at Auckland was worthy of a final

CWC 2015 1st semi final review: The 2015 ICC Cricket World Cup has so far only produced two close contests -- and both have featured New Zealand. The first was the league clash between the Aussies and the Kiwis, which the latter won by one run thanks to Kane Williamson's cool head.

The 2015 ICC Cricket World Cup has so far only produced two close contests -- and both have featured New Zealand. The first was the league clash between the Aussies and the Kiwis, which the latter won by one run thanks to Kane Williamson's cool head. For the second thriller, one had to wait all the way till the semi-final at Auckland between New Zealand and South Africa. But, in view of what the teams put on show on Tuesday, it was worth the wait. Both sides exchanged turns to gain ascendancy, and then give back the advantage and, in the end, the New Zealanders were slightly better as they managed to keep calm when the situation got extremely tense. 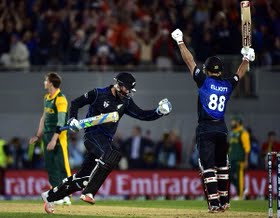 In many ways, the match was worthy of a final, as it had all the ingredients of a pulsating encounter. Both sides felt the pressure, and crumbled only to rise again. The game was played in fantastic spirit with no sledging, and only wholehearted commitment from both sides even when things were not going their way. Neither side gave up till the very end, and even when the penultimate ball was being bowled, neither side had their noses in front. It was just that one big hit that sealed the deal in New Zealand's favour after numerous troughs and crests. In a fairer world, neither side deserved to lose. Alas, in sport, there has to be a winner and a loser.

Every South African loss in a knockout game is equated with ill-luck, and statements of the choke being invoked. But, one just gets the feeling that too much emphasis is being laid on this aspect of South African cricket. Yes, the rain did come down at the wrong time for the Proteas, and took away their momentum. But, they still had a massive score on the board. To put down the loss to bad luck would be a massive discredit to New Zealand, and South Africa's own performance. To point out that South Africa would have had it was easier had they posted 350 in 50 overs is a hypothetical assumption that can never stand good.

The fact of the matter is that South Africa had the upper hand at the halfway stage, and it was New Zealand who were under pressure. Even after Brendon McCullum played yet another sensational knock, the Proteas still held the edge as so much needed to be done. South Africa had numerous chances to put the game beyond New Zealand. AB de Villiers missed an easy run-out of Corey Anderson, de Kock did something similar, and there was a crucial catch dropped in the penultimate over. The weight of the 'jinx' was perhaps playing on the minds, and it got the better of them, perhaps.

While South Africa were facing a hoodoo, the same can be said of New Zealand as well. In their case, it was only bigger -- six semi-final appearances, and not a single victory. They were under as much pressure as the South Africans. Also, the Duckworth-Lewis method did not do them any favour. They were chasing close to 300 in 43 overs, and that was never going to be an easy task. The fantastic crowd support they got definitely helped. And, at the end of the day, it must be said that Kiwis held their nerves better. Irrespective of the result, it must be said, that it was a fantastic game of cricket, one this predictable World Cup so desperately needed. If only, this was the World Cup final...