36 is an age at which most cricketers are contemplating retirement, and planning to move on to something else in life.

36 is an age at which most cricketers are contemplating retirement, and planning to move on to something else in life. The same might not be true for current Aussie wicketkeeper Brad Haddin who, at 36, has only just begun to enjoy the best phase of his international career. It has always been known that Haddin has been unlucky to have played in the same era as Adam Gilchrist. So, while Haddin has always been highly rated as talent in Australian cricket, he forever played under the shadows of Gilchrist, who was far more talented and destructive with the bat. 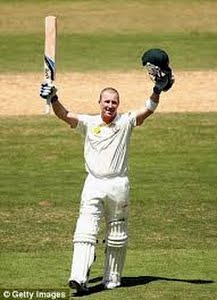 While Haddin got his chance to represent Australia in one-day cricket for the first time back in 2001 and has been in and out of the squad since, he had to expectedly wait till Gilchrist’s retirement in 2008 to take over the job of the gloveman in the five-day game. The fact that he was instantly called up to the side as Gilly’s replacement was a clear indication of how highly Haddin is regarded in Australian cricketing circles. Since, he has featured in over 50 Tests and has scored more than 2700 runs with four hundreds to his credit.

Haddin’s Test figures are reasonably good by international standards. But, considering his talent, more was expected of him. Over the years, the Aussie fans have thus been disappointed with his batting performance in particular. Prior to the recently concluded Adelaide Test, he did have three Test hundreds to his credit, but each were scored in different years. With the kind of experience Haddin possessed at the domestic level, it was expected that Haddin would have been a lot more consistent. Also, since the Aussies have fielded a relatively inexperienced batting outfit over the last few seasons, Haddin was actually among the veterans in the side.

For a while, the Aussies were persisting with Haddin since they did not have a better choice, and Haddin was coming up with decent knocks every time his spot in the team was under pressure. But, his international career was dealt with a major blow when he flew back home from the series in West Indies citing personal issues. In the very same series, the much younger Mathew Wade stood up and took his chance. At that moment, it seemed that Haddin’s career was all but over since he did not have age on his side.

For the next few international contests, Wade was preferred over Haddin ever after the latter made himself available. But, after a year in the wilderness, Haddin was back in the Aussie starting XI for the Mohali Test against India, after Wade got injured. Haddin was retained for the Ashes, and the turnaround for him came when he almost single-handedly pulled off a tough chase for Australia at Nottingham. Aussies lost the game and the Ashes, but Haddin was back with a bang. The veteran has carried the confidence into the ongoing Ashes with scores of 94, 53 and 118. As far as Haddin is concerned, retirement can wait for the moment.