The Auckland Test was a case of so near yet so far for New Zealand as the visiting Englishmen hung on by the scruff off their neck to draw the game, and with it the series, as both the earlier Tests had also ended in stalemates – a rare occurrence in today’s day and age.

The Auckland Test was a case of so near yet so far for New Zealand as the visiting Englishmen hung on by the scruff off their neck to draw the game, and with it the series, as both the earlier Tests had also ended in stalemates – a rare occurrence in today’s day and age. The Kiwis would definitely have been heartbroken at the result since they wereon top for a major portion of the Test, and even on the last day, it seemed that they would cruise home to victory. That was until England staged a tremendous fightback.

The hero of the game for England was undoubtedly their valuable wicketkeeper batsman Matt Prior. Playing one of the best Test innings under pressure in recent times, Prior was successful in seeing his team to safety. Yes, there were a couple of strokes of luck. On another day, he could have been bowled or caught, but on Tuesday at Auckland, it was just his day and to his credit Prior made the best use of it. He wasn’t totally defensive during his unbeaten century; he creamed 20 boundaries, but when it mattered the most, Prior brought forward his best defensive game. 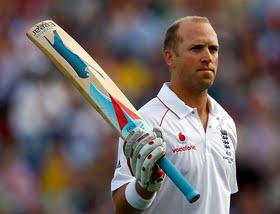 Without doubt, Prior’s unconquered ton was responsible in a major way for England’s great escape. But there were a couple of other contributions that also deserve mention. When Jonny Bairstow fell with the score at 159 for 6 in the 86th over, the result seemed a mere formality since too many overs were left to be bowled. But, the partnership between Ian Bell and Prior game them a semblance of hope. Before Prior pulled off the unbelievable, Bell, who wasn’t in the best of form, held fort for 352 minutes and 271 balls for his 75. Of course it wouldn’t have been of much use had Prior not come up with his masterclass.

Another knock that also aided England in pulling off the rescue act was Stuart Broad’s 137-mintue vigil at the crease, Even though Broad managed to score only 6 off 77 balls, the runs did not matter much. It was the amount of time he spent at the crease that took his side ever closer to safety. The longevity of Broad’s knock can be gauged from the fact that Bell was dismissed in the 111th over, and when Broad fell England’s second innings was in the 140th over. There were some tense moments after England lost James Anderson in quick succession, but Prior ensured his defiance was not in vain, hanging on till the end.

Prior’s brilliance at Auckland overshadowed another brilliant performance by an opposition batsman. Peter Fulton, at long last, proved his actual capability at the international level, cracking masterful centuries in both innings of the Test. It was a performance befitting of a Test win, but just wasn’t to be. With the ball, Trent Boult was superb in the first innings, picking up a six-for, but couldn’t repeat his good work in the second innings. In the end, though Kiwis dominated the Test, England were just about good enough to end the series on even terms.