Veteran New Zealand opener Martin Guptill has said that the Kiwis will not get complacent going into the second ODI against India, as they look to clinch the series

Veteran New Zealand opener Martin Guptill has said that the Kiwis will not get complacent going into the second ODI against India, as they look to clinch the series, despite the stunning effort in the first one-dayer at Hamilton. The visitors will need to win at Eden Park in Auckland to stay alive in the three-match series after the Kiwis chased down a record 348 in the first match.

“I don’t think you can count India out. They are a world-class side, they have got match-winners batting and bowling. So, we still have to put up a very good performance tomorrow to beget another win under the belt and take the series,” Guptill told the media ahead of the crucial second ODI on Saturday.

According to the Kiwi opener, New Zealand’s performance against Indian spinners went a long way in them securing a victory on Wednesday. Kuldeep Yadav finished with figures of 2 for 84 while Ravindra Jadeja went wicketless while conceding 64 in the Hamilton encounter. 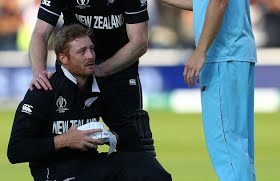 “I thought the way we handled the Indian spinners in Hamilton was some of the best we have done it in a long time. So we can take confidence from that going forward in the series,” he affirmed.

Guptill further added that while facing India’s number one bowler Jasprit Bumrah is a major challenge, things are getting a bit easier the more they play him. “You certainly get used to him. He has got a unique action, he comes in and he is very good with his skills. I thought we played him well on the other night.

“He bowled very well with the new ball and when the time came to take boundaries off him. I thought the guys in the middle did that really well and negated him and did not allow him to take early wickets,” Guptill explained.

The 33-year-old also praised stand-in skipper Tom Latham, who hit a brilliant 60 from 48 in the first game at Hamilton. “I thought Tom played brilliantly. He gave himself some time to get in and then flipped the switch when he needed to and took the pressure a little bit off Ross. It allowed Ross to settle into his own innings as well,” he went on to state.

India batted very well at Hamilton as Shreyas Iyer scored his maiden one-day hundred while the in-form KL Rahul blasted a superb 88 not out from 64 balls. The Indian bowlers, however, failed to defend a massive score of 347 as Ross Taylor and Tom Latham went on the rampage.