England fought hard on Day 4 of the Vizag Test, but India did well enough to stay ahead in the game. Resuming at 98 for 3, India were bowled out for 204. In response, England were 87 for 2 chasing a tough 405. Here’s a look at some significant numbers from play on Day 4

England fought hard on Day 4 of the Vizag Test, but India did well enough to stay ahead in the game. Resuming at 98 for 3, India were bowled out for 204. In response, England were 87 for 2 chasing a tough 405. Here’s a look at some significant numbers from play on Day 4.

This is the second time in the series that skipper Alastair Cook and Haseeb Hameed have batted for over 50 overs. At Rajkot, Cook and Hameed were at the crease together for 58.4 overs, during which they added 180 runs. At Vizag on Sunday, they were at the crease as a pair for 50.2 overs, but scored only 75 runs, as they were looking to bat out time in their endeavour to save the Test. Their partnership run rate was 1.49. 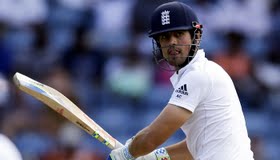 Cook has crossed fifty at least once in each of his last three Tests. He made 14 and 59 at Dhaka against Bangladesh, 21 and 130 at Rajkot and 2 and 54 in the ongoing Vizag Test.

Indian skipper Virat Kohli scored 248 runs across the two innings – 167 in the first innings, and then 81 in the second on Sunday. This is the fourth best match aggregate by an Indian captain in a Test match. Sunil Gavaskar has the top two scores in a Test by an Indian skipper – 289 and 278, both against West Indies in 1978. Kohli is third and fourth in the list. He made 256 against Australia in 2014, before his 248 in this Test. Sachin Tendulkar completes the top 5. He totalled 232 runs against New Zealand in 1999.

Kohli was the only Indian to cross fifty in India’s second innings. While he made 81, debutant Jayant Yadav’s 27 not out was the next best. He made an impressive 35 in the first innings as well.

Cook registered his 11th fifty in the fourth innings of a Test match. He is fifth on the list of batsmen with most fifty-plus scores in the fourth innings. Shivnarine Chanderpaul, Chris Gayle, Graeme Smith (13 each), and Sunil Gavaskar (12) are the only ones ahead of him.

England leggie Adil Rashid has already claimed 13 wickets in the series. This is the fourth best by an overseas legspinner in the last 50 years in India.