Pakistan knocked out by South Africa in crunch game

Pakistan are almost out of the Champions Trophy after suffering a heavy 67-run defeat against the Proteas in a do-or-die match for both the sides. The Misbah-ul-Haq team has lost two matches in a row and has just one match left against arch-rivals India

Pakistan are almost out of the Champions Trophy after suffering a heavy 67-run defeat against the Proteas in a do-or-die match for both the sides. The Misbah-ul-Haq team has lost two matches in a row and has just one match left against arch-rivals India. The only chance for Pak to make it to the Semis is if West Indies beats India and South Africa by big margins and of course Pakistan will have to win against India.

South Africa in the absence of its best bowlers Dale Steyn and Morne Morkel did a remarkable job to defend what looked like a modest total of 234 on a dry pitch at Edgbaston. SA’s reinforcement pacer Chris Morris and Ryan McLaren bowled with lots of pace and bounce to stifle the Pakistani batsmen who went into a shell and never came out of it! South Africa managed to put a lid on Pakistan to bowl them out for 167 in 45 overs.

Defending a modest total of 234, South Africa fought back with debutant Chris Morris delivering two early strikes – Imran Farhat (losing his off stump in the 2nd over by a short of length delivery that nipped back) and Mohammad Hafeez (caught miscuing a pull in the 8th over). Pakistan was crawling at this stage with a run rate of just above 2.00. About 10 overs later, South Africa took their third wicket as a Shoaib Malik forward defence off a turning ball from Duminy rolled back onto the stumps. Pakistan was going nowhere at 48 for 3 in the 18th over.

It was back to a Nasir Jamshed-Misbah show for Pakistan in the middle. The pair could add only 38 runs before Jamshed (42 from 76 balls with 4 fours) got caught and bowled by Lonwabo Tsotsobe in an early drive. By this time, the required run rate had already shot up like anything and Misbah was doing little to bring it down. The next man to perish was Umar Amin miscuing a slog off McLaren in the 39th over. South Africa confirmed their victory when Kamran Akmal slashed McLaren to the diving Du Plessis at point as Pakistan slipped out of the contest at 134 for 6.

Misbah’s scratchy innings came to an end in the 42nd over when his slog off Tsotsobe found Amla at mid wicket. The Pakistani Skipper consumed 75 balls for his 55. Pakistan were soon bundled out for 167 in 45 overs. McLaren claimed 4 for 19 in 8 overs while Tsotsobe and Morris got two wickets each. 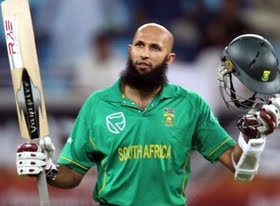 The Proteas early on were restricted to 234 for 9. Hashim Amla battled it out against the quality Pakistani attack to score 81 from 97 balls with 9 fours. Amla gave a solid start for the Proteas putting on 53 in 14.2 overs with fellow opener Colin Ingram (20 from 45 balls, lbw to Hafeez while attempting to sweep a full ball). Faf du Plessis (28 from 40 balls, caught miscuing a pull off Irfan) at no.3 consolidate SA along with Amla to put up a 69-run stand. Amla himself departed in the 32nd over gloving a reverse sweep off Saeed Ajmal.

SA got a nice platform thanks to Amla’s knock but a couple of run outs of the well set AB de Villiers (31 from 31 balls) and JP Duminy (24 from 38 balls) hurt them badly as they entered into the slog overs. Pakistan strangled SA after this to take four more wickets to restrict them to a modest total.

Toss and Teams: South Africa have won the toss and elected to bat first in their Group B Match against Pakistan at Edgbaston in Birmingham. SA have made two changes with left-arm spinner Aaron Phangiso replacing Kleinveldt and Chris Morris, the debutant replacing the injured Morne Morkel who has been ruled out of the tournament. Pakistan have made one change with Umar Amin replacing Asad Shafiq.