West Indies will face Afghanistan in the last match in the group stage for both the sides at the Vidarbha Cricket Association Stadium in Nagpur on Sunday. Darren Sammy’s men have assured themselves of a berth in the final four following their hard-fought but unimpressive win over South Africa on Friday. They had already beaten England and Sri Lanka comprehensively in previous matches, which means victory over Afghanistan will assure them top ranking in their group. Afghanistan, not surprisingly, have been knocked out of the tournament, with three losses in as many games. But, they came very close to giving England a scare, and have made an impression in every match they have played.

West Indies may have progressed to the semi-finals, but they should look to improve on the batting effort they put up against South Africa. It was a match they should have won easily, but only scraped home as their batsmen did not apply themselves. With the knockouts coming up, they will need their best batsmen to be in form. Chris Gayle got a fantastic century in the opening match against England, but did not bat in the next one against Sri Lanka due to injury. He returned against South Africa, but was beaten for pace by Kagiso Rabada, so it has been a mixed event for him. 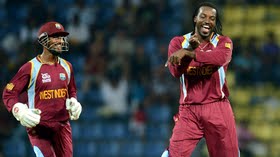 Andre Fletcher played a very good innings against Sri Lanka, which should boost his confidence although the run-out against the Proteas was unneeded. What would please West Indies most in the batting department is that Marlon Samuels absorbed the pressure and took the team close to victory against South Africa. Johnson Charles also chipped in with a crucial innings, though he did not carry on. However, the lower and middle order disappointed. Contributions would be expected from all-rounder Dwayne Bravo, Andre Russell and skipper Darren Sammy.

Rather surprisingly, West Indies have done well with the ball even in the absence of Sunil Narine. Leggie Samuel Badree has bowled smartly in his place, utilising the conditions and troubling the batsmen. He should challenge the Afghanistan batsmen as well. West Indies have been sensible in their selection of bowlers. Sulieman Benn has kept things tight with his left-arm spin while Bravo and Russell both have made good use of their variations, and experience. Even Gayle chipped in with a handy performance with the ball against the South Africans. Overall, West Indies should be pleased with the way things stand.

For Afghanistan, it will all be about building from the massive gains against England even though they ended up on the losing side. Every match is a great learning curve for the team. Mohammad Nabi and Rashid Khan put up brilliant bowling efforts against England, but more will be expected from the likes of Shapoor Zadran and Amir Hamza. In the batting, they had a great chance to overhaul England’s target the other day, but the pressure got to them. They seem over-dependent on Mohammad Shahzad at the top, and Nabi and skipper Samiullah Shenwari in the middle. The others need to start making contributions as well.