After conquering South Africa, Herath looking to sign off on a high against England

At 40, Rangana Herath led Sri Lanka to a Test series win over South Africa, and now is looking forward to the challenge against England, his farewell international series. Herath claimed 6/98 as South Africa

At 40, RanganaHerath led Sri Lanka to a Test series win over South Africa, and now is looking forward to the challenge against England, his farewell international series. Herathclaimed 6/98 as South Africa folded up for 290, as they lost the second Test at the Sinhalese Sports Club Ground (SSC) in Colombo by 199 runs.

"Winning the game and winning the series, against the No.2 side, very pleased with it. The harder ball gives a bit of assistance for the spinners. Spinners bowled really well throughout the series,” Herath was quoted as saying in an ICC report. 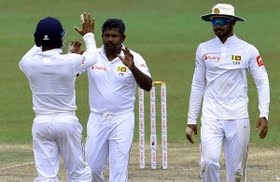 On his retirement, Herathadded, "I know everybody has a time to go. That's why I have decided to stop playing cricket. Hopefully, in the series against England, I will do my best."

Although South Africa lost, skipper Faf du Plessis praised the efforts of Theunis de Bruyn, who scored101, and Keshav Maharaj, who came up with a nine-wicket haul.

"Yes the guys played well. Theunis played an exceptional knock and he showed it was possible to get big runs in these conditions. But, congratulations to Sri Lanka. They were the best teams in the last eight days of cricket, and in all departments, batting and bowling. We have some lessons to learn but we did manage to put in some good performances. Kesh got a nine-for and I think it is a South African record. He has got a bright future ahead of him,” du Plessis said.