When day five of the fifth and final Test between India and England began at Chennai, the hosts were the undoubted favourites to win.

When day five of the fifth and final Test between India and England began at Chennai, the hosts were the undoubted favourites to win. But, the fact was that this was not an unplayable pitch in spite of the wear and tear. And, if England applied themselves there was no reason why they could not salvage a draw. The visitors showed the right attitude early on. Skipper Alastair Cook and Keaton Jennings showed the requisite composure needed under the circumstances. When the two played out the first session without much trouble, a draw seemed imminent. But, the scorecard at the end of day's play displayed a completely different picture. 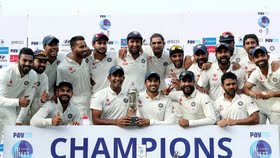 What then went wrong for England in the last two sessions? Ravindra Jadeja's superb spell obviously, but more than him picking up wickets, the visitors ended up becoming a victim of their own lack of self-belief. Yes, Jadeja exploited the pitch, and the rough available. But, more than that he played with the minds of the unsure batsmen. The results reflected in the kinds of dismissals on show. Some played across the line and chipped the ball up in the air. Others missed the line altogether, and were trapped in front. In India one wicket after a big partnership often leads to many more. Jadeja broke the shackles on Tuesday, and the Englishmen crumbled.

While 3-0 and 4-0 doesn't make much of a difference as the series is anyways lost, England will know that they missed an opportunity to finish the tough tour in a decent manner. As mentioned earlier, this wasn't the toughest of pitches, and the openers Cook and Jennings had seen them past the tough first phase. With 10 wickets in hand, England should have batted out two sessions, even on a final day surface. But, once the opening pair was separated, England were just not up for the fight. Joe Root's early dismissal was a big blow. And, although Moeen Ali tried hard, he never really looked like the batsman who could save the match for his team.

In start contrast, India's confidence was to the fore for a majority of the match. Although England had put up 477 on the board, India did not give up. They knew they had won after conceding 400 in Mumbai as well. Their batting effort was positive right throughout, and it always seemed like they were playing for a win. Of course, when the declaration was delayed to allow Karun Nair to reach his historic triple-hundred, one felt India had lost the opportunity to claim the series 4-0. It was worth the punt though. After all, how many players come close to achieving a triple hundred in their careers? And, here was a man playing his third Test who ended up achieving the feat.

Apart from Nair, there were plenty of other healthy efforts from India with the bat. Parthiv Patel carried on his impressive work with the bat, after keeping for 157 overs, as has been admirably mentioned. Lokesh Rahul played a sublime knock missing out on a double hundred by a whisker. Ravichandran Ashwin and Jadeja both contributed with the bat again. The latter then also did the trick with the ball. In an ironic sense, the biggest positive for India from the Chennai triumph was that the victory was achieved without significant contributions from skipper Virat Kohli and Ashwin, the team's biggest match-winners with bat and ball respectively.