Winning the ODI series will not heal the wounds inflicted by the 3-0 Ashes loss on Australia, but it would definitely make them feel better. The series is only one match old with the first ODI being washed out due to rain.

Winning the ODI series will not heal the wounds inflicted by the 3-0 Ashes loss on Australia, but it would definitely make them feel better. The series is only one match old with the first ODI being washed out due to rain. Following their impressive showing at Old Trafford though it can be said that they have made a positive start in their endeavour to try and clinch at least the one-day series, having lost the Tests and drawing the T20s. Australia were dominant with both bat and ball, and as a result won the match comfortably.

At the start of the series this writer had mentioned that Australia would feel a lot more at home in the one-dayers as opposed to the Tests since they have the team to give England a tough fight. This is exactly what they did at Old Trafford. In fact, they were dominant to the core as a result of which England never came anywhere close to challenging Australia on Sunday. Often the end result of the game does not give out the exact picture, but Australia’s 88-run triumph over England was as comprehensive as the figures suggest. 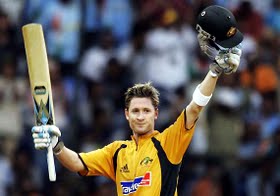 As often is the case in one-day matches, it was one massive partnership that effectively clinched the deal for Australia. In this case, it was the alliance between skipper Michael Clarke and T20 captain George Bailey. When Clarke and Bailey joined hands, Australia were in a decent position but a far from comfortable one. It was their partnership that took the Aussies to a comfy position from where they could dominate the match. By the time they were separated, Australia were well and truly in control of the game, and it wasn’t surprising to see them get home without much trouble in the end.

During their blitzkrieg, Clarke and Bailey exposed the weaknesses in the England bowling camp. Unlike in the Tests, they did not have the wealth of James Anderson and Graeme Swann’s experience. Steven Finn has been around for a while but he clearly hasn’t achieved the level of consistency for England to put full faith in him. His lack of dynamism was exposed yet again by the Aussies. The inexperience of Ben Stokes also came to the fore as he was taken to the cleaners. England had high hopes from James Tredwell, but he had a rare off-day, which made matters worse for the hosts.

Having conceded a massive score, England needed their batsmen to stand up. But most of their felt the pressure of the run rate and succumbed. Three of their batsmen did end up with half-centuries, but there was no match-turning partnership like the one between Clarke and Bailey earlier. Kevin Pietersen, skipper Eoin Morgan and, later, Jos Buttler were the batsmen who crossed fifties, but there was little support for them and KP and Morgan were themselves guilty of giving their wickets away. It is easier to bowl well when you have a huge score to defend. Still, credit is due for Clint McKay and Mitchell Johnson, who ensured that England were never in the hunt.