The 2011 Champions League T20 took place in India. This time qualifying matches were also held following which 10 teams were finalised, and were divided into two groups of five teams each. Group A consisted of New South Wales, Mumbai Indians...

The 2011 Champions League T20 took place in India. This time qualifying matches were also held following which 10 teams were finalised, and were divided into two groups of five teams each. Group A consisted of New South Wales, Mumbai Indians, Trinidad & Tobago, Cape Cobras and Chennai Super Kings. Group B featured Somerset, Royal Challengers Bangalore, Kolkata Knight Riders, Warriors and South Australia. The teams which couldn’t make it past the qualifying round were Auckland, Ruhuna and Leicestershire. The main round again saw 20 games, and the four semi-finalists were as follows -- Royal Challengers Bangalore, New South Wales, Mumbai Indians and Somerset.

First semi-final: Former champions New South Wales took on RCB in the first semi-final. Bangalore won the toss and chose to field, but NSW made them repent the decision. The NSW innings was all about one man. Opener David Warner smashed an unbelievable 123 off only 68 balls. The innings featured 11 sixes. Warner found good support in Daniel Smith, who made 62 from 47 balls as NSW amassed 203 for 2. Bangalore needed something sensational to chase that down. And they got that as Chris Gayle blasted 92 from 41 balls with 8 sixes and Virat Kohli smashed an unbeaten 84 from 49 balls, as Bangalore stormed into the final. 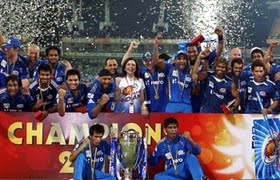 Second semi-final: Mumbai Indians took on Somerset in the other semi-final. This was a much more closely-contested tussle. Mumbai batted first and made a competitive 160 for 5. Opener Aiden Blizzard made 54 from 39 balls. The other contributions came from lower down the order with Pollard, Suryakumar Yadav and R Sathish all making 20s. Somerset were in the hunt as Craig Kieswetter raced to 62 off 46 balls. James Hildreth also contributed 39 from 33 balls, but the chase lost sting after their dismissals. Malinga blew away Somerset with figures of 4 for 20 as Somerset were restricted to 150 for 7.

The final: The summit clash between MI and RCB at Chepauk promised a lot but turned out to be a disappointingly one-sided clash. Mumbai batted first and were below par; they were bowled out for 139 in exactly 20 overs. James Franklin top scored for Mumbai with 41, but the rest couldn’t contribute much. Raju Bhatkal was the most successful Bangalore bowler with 3 for 21. Bangalore had a great chance to clinch the tournament, but floundered under pressure. Gayle fell to Harbhajan for 5 and they could never recover from that setback. Tillakaratne Dishan ended up being the highest scorer with 27 as Bangalore were cleaned up for 108. Harbhajan led from the front for Mumbai with figures of 3 for 20 while three other bowlers chipped with two wickets each.

Most successful players: David Warner scored the most runs in this edition of the CLT20, with 328 runs from five matches. Ravi Rampaul from Trinidad & Tobago was the most successful bowler – he picked 12 wickets from six games.