Indian all-rounder Hardik Pandya has been completely ruled out of India's tour of New Zealand. Pandya missed the ongoing T20I series against the Kiwis as he is recovering

Indian all-rounder Hardik Pandya has been completely ruled out of India's tour of New Zealand. Pandya missed the ongoing T20I series against the Kiwis as he is recovering following back surgery. There were reports that he might make a comeback for the Tests in New Zealand. However, it is clear now that it won’t happen.

A BCCI release confirmed that the 26-year-old will continue to be under rehab at the NCA. "Team India all-rounder Hardik Pandya has been ruled out of the upcoming Test series against New Zealand. He traveled to London and was accompanied by NCA Head Physio Ashish Kaushik for a review by spinal surgeon Dr. James Allibone. Hardik will be under rehab at the National Cricket Academy until he regains full match fitness," the BCCI said while releasing the statement.

Pandya last played for India during the South Africa T20Is in September, after which he underwent back surgery in October, and has been missing from action since. Pandya was initially even selected in India A squad for the tour of New Zealand. However, his name was later withdrawn to give him additional time to get fit for Tests in New Zealand. 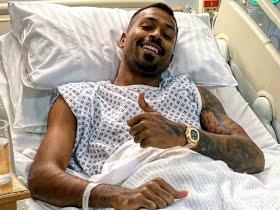 The Men in Blue are currently lead the 5-match T20I series 4-0, with the final match to be played on Sunday at Bay Oval in Mount Maunganui. The T20Is will be followed by three one-dayers starting from February 5. The Test series will kick-off from February 21. Following the Kiwi tour, India will feature in a three-match ODI series against South Africa at home.

Earlier, Pandya also failed the bowling workload monitoring test, which is a mandatory requirement after returning from back surgery, and hence wasn’t picked for the New Zealand T20Is. Speaking to India Today last month, Pandya had said, "It has been difficult. Coming back from an injury is not easy. It looks easy when you see a guy coming back with nothing changed at all. It looks easy but the process which follows is actually tough.”

Pandya, who first made a name for himself with his big-hitting skills in the IPL, is a key figure in India’s limited-overs set-up. He has featured In 54 ODIs and 40 T20Is for India apart from 11 Tests having made his international debut in 2016. India will be desperate for him to be fit before the World T20 to be held in Australia later in the year.