In their preview to the Visakhapatnam ODI, this writer had clearly mentioned that India would be thoroughly disappointed if they do not go on to clinch the one-day series 3-0.

In their preview to the Visakhapatnam ODI, this writer had clearly mentioned that India would be thoroughly disappointed if they do not go on to clinch the one-day series 3-0. And considering that they lost the second ODI, which means the series is now level 1-1, they would certainly be feeling a little uncomfortable. The loss came against an ODI side, which has been struggling to win even against the lower-placed sides. Also, the game was played minus their big match-winner Chris Gayle, who has been flown back owing to his injury. Above all, India have better players for the conditions. 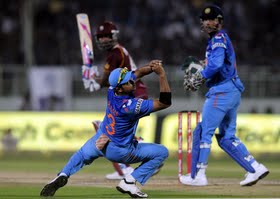 India may look back and point towards the fact that the dew did not allow them to defend a reasonably challenging total against a weak West Indies, which MS Dhoni did at the presentation, but they shouldn’t forget that they put down five catches during the West Indies, including three in four balls. Even with the amount of dew around this sort of effort is unacceptable, and even more disappointing when you consider that India have transformed themselves into one of the best fielding outfits in international cricket in recent years.

More than their fielding though, it was their batting that cost them the game. Agreed, 288 is a competitive score, but unlike a few years back, it is no longer a match-winning total, not with the amount of field restrictions and power plays in place. In fact, any team restricting the opposition to under 300 is the favourite to win the contest these days. And so it was with the West Indies, although they stumbled almost unable to come to terms with the fact that they could pull off the win against the mighty Indians in the latter’s home territory.

India’s batting wasn’t poor throughout; it hasn’t been for a while. But, there was a certain phase during their innings where they lost crucial wickets and couldn’t accelerate the scoring that eventually came back to haunt them. For a while now Suresh Raina and Yuvraj Singh have been struggling to get the runs. On Sunday, both of them got starts, but perished while attempting the big shots. All this while, India performed well in spite of the lack of runs from the experienced duo because the top three – Dhawan, Rohit and Kohli have been in such splendid form. Kohli continued his brilliant run, but the openers failed. This is where India needed the services of Yurvaj and Raina, but they couldn’t stand up to the task, and India suffered.

Kohli’s dismissal in the match came at a crucial point, which was a game changer in a big way. He fell one short of another century, but critically India still had another 10 overs to play out. Except Dhoni, the lower order couldn’t put up much of a fight. Ravindra Jadeja in particular struggled at a time when India needed the big hits from him. A couple of lusty strokes from Ravichandran Ashwin did give India some momentum, but the major damage had been done earlier by some tight Windies bowling.