ndia defeated Sri Lanka in the 2011 World Cup final, and Mahendra Singh Dhoni promotion was one of the defining moments of the final.

India defeated Sri Lanka in the 2011 World Cup final, and Mahendra Singh Dhoni promotion was one of the defining moments of the final.

Virender Sehwag recently revealed in a Deccan Chronicle report that the idea was suggested by Sachin Tendulkar.

So, that was also suggested by him (Sachin) and this was the first time he directly passea message to MS, otherwise it always went through Lala (Sehwag) and the result is in front of you,” Sehwag revealed on What the Duck. 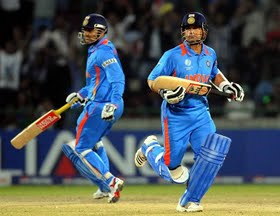 Gautam Gambhir and Virat Kohli featured in an 83-run stand, but when Kohli was dismissed, a right-hander, Dhoni came in ahead of the in-form Yuvraj Singh.

“So, finally in between MS Dhoni came in and at that time Virat Kohli and Gautam were batting. So, he told MS, if righty gets out, then go for righty and lefty gets out, go for a lefty. After saying this, he went to the bathroom and then back out. And then Virat Kohli got out and in place of him, MS Dhoni went for the batting, Sehwag recalled on the show, according to Deccan Chronicle.