I come out thinking I have not played any ODIs: Rohit Sharma on record fifth ton

Batting first, Sri Lanka posted a challenging 264 on the board courtesy an Angelo Mathews ton which helped them recover from 55 for 4. Hundreds from openers Rohit Sharma and Lokesh Rahul though sealed the deal in India's favour as India finished the league stage with only one defeat. Jasprit Bumrah, yet again, starred for India with the ball, clinching three scalps.

Speaking after the game, Rohit revealed the secret of his success this World Cup. “The shot selection becomes important once I am in. I try and calculate how I want to go forward based on that. There has to be some discipline in your batting and I have learned that from my past." 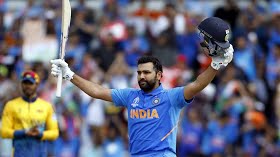 “I come out thinking I have not played any ODIs or scored any hundreds. That is the challenge as a sportsperson. I know if I play well all these thing will come along the way. My job is to keep my head straight and get my team to the finishing line," the India opener went on to explain.

Meanwhile, Rohit was all praise for Lasith Malinga, his Mumbai Indians teammate, who is not likely to play in another World Cup. “He has been a champion bowler for Sri Lanka and then for Mumbai Indians. He has shown it over the years how the teams rely on him. I have seen him in close quarters and the cricket world will miss him," said Rohit in praise of Malinga.

Indian skipper Virat Kohli too is happy the way things have shaped up for India in the World Cup, admitting though that he didn't expect this kind of a sublime performance from the team. “We wanted to play good cricket. To be honest, we didn't expect this kind of scoreline heading into the semis. But that's what consistent performances and hard work get you,” Kohli said.

“We don't want to be one dimensional, I think the team that is more flexible on the day has more chances of executing what they want to. Obviously the dimensions and the pitches we play on will matter a lot, so we need a good balance in the side and whatever combination provides us the balance we will go ahead with that and really feel confident if we are batting first or bowling first we are covered with all dimensions.”

Kohli had a special word for all-rounder Hardik Pandya, who has given the team an extra edge and much-needed flexibility in both batting and bowling.

“He has been outstanding especially after being under the pump in the first 3-4 games, but he has come back beautifully, so he's really motivated. It is amazing to have a cricketer like that who can bring in so much to the table," Kohli stated.

Following Australia's defeat to South Africa, India now face New Zealand in the first semi-final while Australia will take on England in the other.