Tendulkar not as great as Bradman and Sobers

It has been suggested, over and over again, by many of his most ardent fans, that Sachin Tendulkar is the best cricketer of all time. The Indian master’s quality as a batsman is undisputed; he is one of the finest to ever wield a blade.

It has been suggested, over and over again, by many of his most ardent fans, that Sachin Tendulkar is the best cricketer of all time. The Indian master’s quality as a batsman is undisputed; he is one of the finest to ever wield a blade. But though he is undoubtedly one of the best, there are a number of players whose claims, it can be reasonably argued, are at least the equal of his, with players like Brian Lara, Walter Hammond, Jacques Kallis, Kapil Dev and Viv Richards coming readily to mind. Most outrageous of all, however, is that Tendulkar is proclaimed, by many in his homeland, a superior cricketer to Sir Donald Bradman and Sir Garfield Sobers. 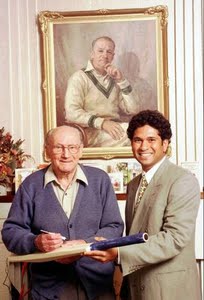 I, for one, thought that it was a given that the diminutive Australian was easily the game’s best batsman. Normally, discussions ranking the occupants of batting’s elite firmament conclude with Bradman at the top, followed by space, and then with Richards, Tendulkar, Lara, Hammond, Hobbs and others listed in some order a few rungs below the great man.

Admittedly, it is difficult and often unfair to compare players of different eras. But while Bradman was the best of his time by far, Tendulkar has had to fight with the likes of Brian Lara, Jacques Kallis and Ricky Ponting for the top spot. And if you are tempted to think that run-scoring was easier in the Don’s time because of variants like today’s more athletic fielding and an LBW rule which now allows the bowler the latitude of pitching the ball outside off, then you should ponder the fact that he played on uncovered wickets, with bats that were inferior of those today and with less protective equipment. Would the Don have conquered the ferocity of Harold Larwood and Bill Voce, for instance, had helmets been available during the Bodyline series?

In the history of sport there can hardly have been an athlete more dominant than Bradman. Consider that the Australian averaged 99.94 in test cricket, almost 40 more than the next in line, and about 44 more than Tendulkar. Consider again that in his worst series, the controversial Bodyline tour, he averaged over 56, which is more than the Indian master’s overall test average. Further, consider that Bradman made a hundred one out of every three visits to the crease; that he scored a triple century in a single day, and that newspapers sometimes marked his dismissal with one telling front page headline: “He’s Out!” So rare and unexpected was that occurrence.

Jack Fingleton, a teammate of Bradman, offered an idea of how bowlers must have felt going up against Bradman:

It is not difficult to believe that bowlers’ thoughts of Bradman were hard ones. Imagine yourself as Tate, Mailey, or Ironmonger. What would your thoughts of Bradman be? If you had spun the flesh off your fingers; if you had planned and sweated for aching day after day until your shoulders were heavy and your heart despondent; if you had done all this and seen your honest offerings treated with the smile of contempt… (Cricket Crisis, p.34.)

Has any other batsman made bowlers feel so helpless?

Now, let us look at Sir Garfield Sobers, widely regarded as the best all-round cricketer in history. As purely a batsman, the West Indian wonder would have been rated amongst the very best of all time. But while averaging 57.78 runs per innings in test cricket, the one-time West Indies captain was also busy collecting 235 wickets at 34.03 in an unheard of three different bowling styles. Kallis’ test figures compare favourably with those of Sobers, but he wasn’t the “five-in-one cricketer” that Bradman labeled Sobers. Nor does he play in the forceful and flamboyant manner of the Barbadian.

First coming to prominence as an left-arm finger spinner, Sir Gary was able to develop into a seamer capable of bowling, on occasion, as quickly as the formidable Wes Hall, and, for a short while, before his shoulder failed him, he was also a chinaman and googly bowler. Add to that the fact that the tall left-hander was one of the best fielders going around, capable of fielding anywhere and catching anything.

Consequently, while one could suggest that there have been batsmen who are superior to Sobers, it would take a very brave man to contend that anyone ever mastered every department of the game the way he did. It is for that reason that the West Indian is the one most often cited as the greatest cricketer (As opposed to the greatest batsman or bowler) in history.

So while there is no denying Tendulkar’s place in history as one of the game’s greatest players, his placement at the top of the pile is highly questionable. He certainly occupies a place near the top of the rankings but there are at least two players who are undoubtedly more deserving of the top spot. No objective and knowledgeable observer would disagree.