Will be nice to bat higher in ODIs: Maxwell after a stunning knock

Glenn Maxwell, while extremely pleased with his performance in the 2nd T20 at Bengaluru, now hopes that he gets to bat higher in the ODIs that will follow.

Glenn Maxwell, while extremely pleased with his performance in the 2nd T20 at Bengaluru, now hopes that he gets to bat higher in the ODIs that will follow. Maxwell floored India with a superlative century as the hosts were blanked 2-0 against all expectations.

"When I came in tonight, there were 15 overs to go, I think. That's still 15 overs to bat and I was able to get 100, so even if I'm doing that at No.7 or No.6 it doesn't really matter. I suppose it's just about me making the most of opportunities when I do get them,” Maxwell was quoted as saying in an ESPN Cricinfo report.

On why he would prefer to bat higher in the ODIs, Maxwell explained, "Sometimes it's not easy over here to come in at the end and just go like that because the ball is a lot older, guys are bowling death at you from the start and the ball's spinning, the wickets deteriorate a lot quicker over here. 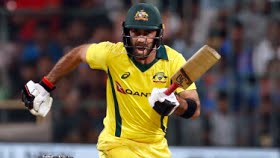 “So it'd be nice to bat higher, but there's obviously a lot of well-credentialed players in our top four and top five that thoroughly deserve their spot,” Maxwell further explained to Cricinfo.

Maxwell agreed that playing in the Big Bash League ahead of the T20 series was also a big help. India now faces Australia in the ODIs in a five-match series.