It may have come on a dead pitch at the Sinhalese Sports Club (SCC) at Colombo, but Pakistan’s drawn effort would have done a world of good for them. Psychologically, they were down and out after the pasting they took at Galle.

It may have come on a dead pitch at the Sinhalese Sports Club (SCC) at Colombo, but Pakistan’s drawn effort would have done a world of good for them. Psychologically, they were down and out after the pasting they took at Galle. And they were done a huge favour by Mahela Jayawardene in the second Test, after the Lankan captain decided to insert the opposition in after winning the toss. It was just what the doctor ordered as far as a struggling Lankan batting line-up had ordered. Test after Test before that, the batting line up failed to put up even 300 on board. 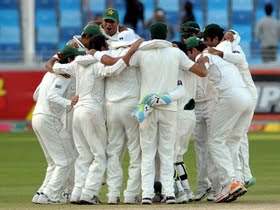 Even though the second Test ended in a draw, there were plenty of positives to take away for Pakistan. Irrespective of the pitch, Misbah-Ul-Haq’s return as skipper did make a difference. Not only did Misbah contribute with the bat, under him Pakistan looked a much-more settled outfit as expected. With Misbah taking over the responsibility of leading the side, struggling opener Mohammad Hafeez could concentrate solely on his batting. Aided by a benign pitch, Hafeez went about his task of building a solid innings in right earnest. Often chided for his tendency of throwing his wicket away after getting starts, Hafeez kept his head well at Colombo and compiled a patient innings, which surely will take some pressure off him. Hafeez batted for 427 minutes in the first innings, which proved that he can play the long innings.

A lot was said of his captaincy skills in the run up to this series. However, ever since he was given charge of leading the T20 side, he has looked flustered. Even in the first Test, where he was forced to captain the team with Misbah being banned over poor maintenance of over-rate, he seemed out of sorts. Possibly, all the talks over the ‘Professor’ being the perfect choice to take over from Misbah have proved to be premature for now. Hafeez has a lot of work to do as a leader. He can experiment with his skills in the T20s, but for ODIs and Tests, Misbah seems the better choice for now.

The SSC Test also witnessed a ton by Azhar Ali, who once again reiterated that he is becoming among Pakistan’s most reliable batsmen. Azhar Ali was among the few positives for Pakistan with the bat in the ODIs, and must be credited for carrying the good work into the Tests as well. If he continues in the same consistent vein, Ali could take over from Younis Khan as the anchorman of the team. Misbah’s solid batting effort was also a positive, while Junaid Khan’s five-for gave them some moments to cheer in the field.

Overall, a good Test for Pakistan, from where they can build on to better things.