With an impressive return of three wins from four games, Australia will be expected to continue their dominance when they face a badly struggling Sri Lanka in match number 20 of World Cup 2019 at The Oval in London.

Having gone down to India, Australia bounced back with a superlative effort against Pakistan. David Warner's fluent hundred was the big plus for the Aussies in the last game. While he had scored runs in the earlier games as well, it was the manner in which the runs were scored that would have pleased him as well as the team. 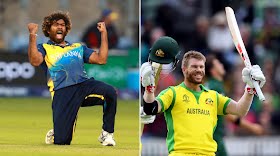 Apart from Warner, skipper and his opening partner Aaron Finch has also been among the runs. He looked completely at ease during his 82 out in the middle. However, despite Australia's impressive run, it is clear that they are still not at their best. The stunning collapse to Mohammad Amir raised some questions about their middle and lower order. Usman Khawaja has not quite converted the starts and that would be a worry for them.

In the bowling department, Mitchell Starc recovered well after a poor start against India while Pat Cummins has been brilliant throughout. While Adam Zampa, with his experience, could retain his place back in the team, the fifth bowler is a worry as Glenn Maxwell is being targeted by most teams.

Sri Lanka have had little to cheer in the tournament so far. After being bulldozed by New Zealand, they narrowly escaped embarrassment against Afghanistan. To make things worse, two of their matches have been completely washed out. They would go into the game against Australia low on confidence, unsure of even their starting eleven.

Their batting has struggled miserably managing only 136 and 201 in the two completed matches. Dimuth Karunaratne and Kusal Perera have got fifties in the two matches but the rest have had nothing to offer. Sri Lanka desperately need Angelo Mathews to make a mark for them to find some rhythm in the championship.

The big-hitting Thisara Perera will also need to find some runs. If he gets his into nick, it would be an advantage of sorts for Sri Lanka as he is capable of turning the game around. Lasith Malinga and Nuwan Pradeep have impressive with the ball for the Asian side. However, one really cannot read too much into the bowling as the batsmen have hardly given them any opportunity to prove themselves.

Again, the prayers will be for the rain gods to stay away.