There is nothing special about Rajasthan Royals’ Kevon Cooper. He trudges in like any other medium pacer. In fact, unlike many other noted names who ply the same trade, he doesn’t even have a prominent run up to the crease.

There is nothing special about Rajasthan Royals’ Kevon Cooper. He trudges in like any other medium pacer. In fact, unlike many other noted names who ply the same trade, he doesn’t even have a prominent run up to the crease. Cooper does his job so gently that the opposition batsmen are almost fooled into believing that this bowler is no threat for them. Perhaps, this is one of the reasons Cooper gets so many wickets, or may be not. Perhaps, Cooper is way smarter that the opponents believe, and than his run up may suggest. 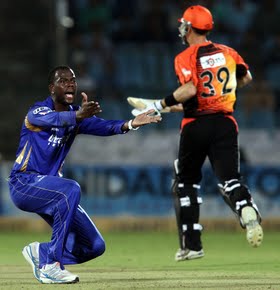 T20 makes heroes out of little-known names, and Cooper has definitely been one of them. His greatest strength while bowling is his ability to put the ball in the right areas and get crucial wickets. This is exactly what he did against Perth Scorchers at Jaipur on Sunday. Cooper is a very good exponent of the yorker and his skill of this came to the fore against Perth, who had no idea how to deal with his probing deliveries. Three of Perth’s major batsmen fell to Cooper’s guile in quick succession, and this is where the side batting first all but lost the game.

Cooper was aided by the fact that the bowlers who came in earlier also made a significant impression on the Perth batsmen. Batting first, Perth were seeking a confident start, but James Faulkner and Shane Watson made sure that there was no respite for the batting side at the start of the innings. Faulkner’s spell in particular restricted Perth’s batsmen. For the second match in a row, 41-year-old Pravin Tambe proved that age is no bar to succeed in T20 cricket. His fine spell played its part in Perth getting nowhere near a competitive total.

Chasing a modest target, Perth needed someone to come up with an extraordinary performance with the ball. That never came, and the match continued to remain a one-sided affair. Although skipper Rahul Dravid was dismissed early on, Ajinkya Rahane and Sanju Samson saw to it that there was no further pressure built up on the batting side. It definitely helped that the duo knew they did not have to go after the bowling. T20 batting becomes a breeze when the run rate equation is taken out. Although Perth could have bowled better, one cannot find much fault in their performance, as there was hardly any scope for one. It was the team’s insipid batting that cost them.